Bazza's Blockade is the eleventh level in Donkey Kong Country 3: Dixie Kong's Double Trouble! and the first level of Cotton Top Cove. In this level, an indefinite number of Bazzas swim in and out of the holes in the coral reef, this being the enemy's only appearance in the original version of the game. Dixie and Kiddy must exercise timing to swim by them. One Bounty Bass appears in the level, marking the enemy's first level appearance. Kocos and Lurchins are other enemies in the level, although the latter only appears in a Bonus Level. To the left of the letter N, the Kongs can optionally transform into Enguarde from its Animal Barrel, or by entering the second Bonus Level.

At the beginning of the level, the Kongs swim out of a cave and down towards a DK Barrel and a school of Bazzas traveling across a wide area. The letter K is in the uppermost part of this area. Soon, the apes travel north past a Koco and to another group of Bazzas that swim over two Banana Bunches. They can find more Kocos in their path as they travel through a thin, curvy passage. Eventually, the path leads them south towards some more groups of Bazzas. The second group swims over a small alcove that contains a Bonus Barrel. There are more schools of Bazzas as the Kongs continue up the path to the north. This time, each row of Bazzas is close together. Soon, the primates find a slightly wider path leading east, with one row of Bazzas swimming across it. After they dodge these barracuda enemies, they encounter some Kocos and the letter O. A thin, U-shaped passage follows here, and a Star Barrel is at the bottom of it. 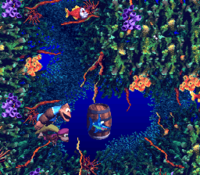 Bazzas also swim across this curved pathway. Once the Kongs pass the foes, they continue up to a DK Barrel and more rows of Bazzas, some of which that are close together. A much thinner path leading to the east is at the top of this area, and Bazzas travel through it. If the Kongs survive this potion of the level, they head south through an area containing a few more schools of Bazzas. An additional school is ahead, just before a pathway to the north that leads past two more rows of Bazzas and to another thin passage. Another group of Bazzas swims through the thin passage, which can lead the Kongs to the left or right. If they head left, they can find a wider area with a Bonus Barrel, but if they travel right, they can progress farther into the level, where there is another wide area that contains a few Kocos, the letter N, and an Animal Barrel containing Enguarde.

If the apes swim east from here, they reach a pathway leading downwards. The pathway consists of four more Bazza schools and a DK Barrel. Farther ahead of here, the Kongs can find some Bazzas that swim through their path. If they are dodged, the Kongs access a wide area that holds a single Bounty Bass, who Enguarde can defeat to earn a bear coin. After the apes pass more Bazzas as they head to the south, they pass a No Animal Sign. If they pass the sign with Enguarde, the Animal Friend disappears and they are given the letter G. The entrance to a cave is nearby. Inside the cave, they can find the Level Flag and a Koin.