Not to be confused with Perry.

“This fellow is never too far away and helps you collect out-of-reach items. Once you release Parry, he will follow you from above, collecting items.”
—Donkey Kong Country 3: Dixie Kong's Double Trouble! instruction booklet, page 17

Parry is an Animal Friend who only appears in Donkey Kong Country 3: Dixie Kong's Double Trouble! He is a small yellow bird with a blue head and a white neck-stripe; his blue wing-feathers are tipped with red, and he has two long, curved tail feathers, giving him a similar appearance to certain birds-of-paradise, such as the red bird-of-paradise. Parry's name is a shortened form of the word "parallel" ("to be an equal distance apart"), and likely also plays off "paradise."

Parry is the only Animal Friend who does not appear in Donkey Kong Land III. 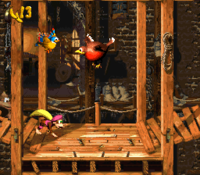 Parry and the Kongs go to a Booty Bird in Squeals on Wheels.

The Kongs can primarily utilize Parry to get out-of-reach items, such as Banana Bunch Coins, Bananas, or an Extra Life Balloon. In this way, the Kongs can use him to grab out-of-reach items, typically from mimicking their jump movement. Parry is the most vulnerable Animal Friend because he can be defeated by almost every enemy he gets in contact with. Parry cannot defeat any enemy except for Booty Birds, which Parry can defeat by moving into them.

The Kongs usually receive a large reward if they successfully navigate Parry past his No Animal Sign, such as a Blue Balloon or even an accessible Bonus Barrel.

Parry appears in five levels, most of which each have a different level theme: Squeals on Wheels, Rocket Barrel Ride, Barrel Drop Bounce, Ropey Rumpus, and Stampede Sprint. Nearly half of Parry's level appearances are in waterfall-themed stages.