Stormy Seas is the thirty-second level in the Game Boy Advance version of Donkey Kong Country 3 and the second level of Pacifica.

The level takes place at a lakeside, on a series of boardwalks. Storm clouds and strong waves are shown in the background. Dixie and Kiddy encounter Re-Koil, Krackas, and Sneeks on the boardwalks. The Kongs must also climb across ropes and swim in the dark lake below. Klasps and Buzzes are enemies that appear around the ropes, usually guarding items such as bear coins. The Kongs can finish the level without using any of the ropes except for one directly before the level exit.

Halfway through the level, under the Star Barrel, the Kongs can break an animal crate of Enguarde. The Animal Friend can defeat Kocos and obtain the letter N by defeating a Bounty Bass along the way. A Nibbla appears in a Bonus Level. 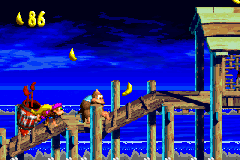 The Kongs run from a Kracka

At the beginning of the level, the heroes travel under some roofs, supported by strong stilts, and walk down a few slanted pathways to find a small gap of water. They must cross it and head through another tunnel, entering the water afterwards. In the ocean, they find the letter K, and then get back onto the wharf to meet a Kracka. Moving on, the apes trudge along some more straight or slanted boardwalks to find the letter O on top of a tunnel. After that, the monkeys drop down from a ledge, finding two more Krackas. They need to dodge both and continue forward to pass three Sneeks, as well as find the Star Barrel.

About halfway into the level, the heroes walk across more of the wharf to find some tightropes. Climbing across to avoid the stormy, enemy-filled ocean, they dodge the land foes, Buzzes and Klasps. Once they get back on the boardwalks, the apes make their way under a tunnel to find another set of horizontal tightropes. Again, they should be used to cross the wavy ocean below. While climbing across the ropes, the monkeys jump between two green Buzzes, whom they must make sure to avoid. Hopping off of the tightropes, the monkeys head under yet another small tunnel and meet the border between the wharf and the water. They must swim through the liquid and pass the No Animal Sign, which makes Enguarde disappear if he was used. Leaping up some ledges on the wharf, Dixie Kong and Kiddy Kong will find two Banana Bunches under a tunnel surrounded by Krackas, and then head across a straight set of boardwalks to spot some more tightropes. As usual, they must be used to cross the dangerous waters below. After dodging all the Buzzes around the tightropes, the Kongs head along another set of boardwalks until they find some small tightropes, supported by stilts that progressively become higher. Hopping rope-to-rope over the ocean, they soon end up in a high area of the wharf and avoid several enemies. After traveling over some boardwalks and passing through a small tunnel, the monkeys find a flagpole. Raising its flag ends the level.