Not to be confused with GBA Riverside Park.

Riverside Race is the seventh level in Donkey Kong Country 3: Dixie Kong's Double Trouble! and the second level of Kremwood Forest. As the name suggests, Riverside Race takes place at a river. It is the only level with a timer at the bottom-right screen, keeping track of how long it takes for Dixie and Kiddy to complete the level, more specifically under Brash's record of 1 minute 15 seconds. Throughout the level, the Kongs are chased by invincible killer bees. The Kongs can avoid them while swimming underwater. Kocos are the only underwater enemy in the level. Kiddy can bounce on the water to reach higher areas; this is necessary for reaching the Koin and the two Bonus Barrels. An Invincibility Barrel is in the bottom-left corner of one of the water areas, allowing the Kongs to jump on red Buzzes to reach a higher area.

The Kongs are not required to beat Brash's time to complete the level itself. If the Kongs set a new record and then visit Brash, he throws a tantrum from losing and causes a tremor that makes a log fall in the river. The log acts as a bridge to the secret cave.

The Kongs begin the level on a pathway positioned under a DK Barrel and a trail of bananas. Once the Kongs pass the bananas, a swarm of Buzzes begins to chase them down the area, where they can find a Banana Bunch and a pair of Sneeks. Soon, they come up to a banana trail that leads them into an area of water full of bananas. The Buzzes continue to chase them as they exit the water, which is followed by a pathway supporting a Re-Koil, who bounces near the letter K. After the Kongs drop down to a ledge, they come up to a Sneek and another water area that contains a Koco and an underwater passage leading through a large structure that blocks the Kongs' path. Kiddy Kong can use his abilities to reach the top of the structure, where a Bonus Barrel is located. (Alternatively, if the player has both Kongs, jumping into the killer bees will give the player more vertical distance and thus be able to make the jump.) The underwater passage is full of bananas and a Banana Bunch, and once they pass these items and exit the passage, they find their way back onto land, where the letter O is located. If they continue down the pathway, they reach a raised piece of ground with Re-Koils around it. A water area follows the second Re-Koil, and in this water, the Kongs can find another Koco and an underwater passage that leads through a large piece of land that blocks the Kongs' path. The Star Barrel is in this passage near some trails of bananas. 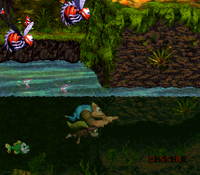 The Kongs head into an underwater passage.

After the Kongs reach the other side of the passage, they can find another DK Barrel surrounded by bananas in a wider underwater area. To the right of here, they find dry land with a few Knik-Knaks to the left of it. The Kongs can jump on them to reach a high ledge with a red Extra Life Balloon on it. If the primates journey east from the Knik-Knaks, they come along a pathway that leads to another area of water. As they head towards the liquid, the killer bees chases them past a pair of Re-Koils. In the water, they can find a Koco and some bananas. A small section of dry, solid land is ahead of the water that the Kongs must head down to reach a larger section of water with three red Buzzes flying over it. With the use of a nearby Invincibility Barrel, they can bounce on these foes to reach an area on top of a large area of dry land that can lead them to a Bonus Barrel. (Alternatively, if the player has both Kongs, jumping into the rightmost Buzz will give the player more vertical distance and thus be able to make the jump.)

This area of land cannot be passed unless the Kongs climb over it or unless they head through the underwater passage at the bottom of it. The passage is located next to a Koco and a trail of bananas, and it leads into another wide area of water with a wall of three Kocos in it. On the other side of the Kocos, they can find a section of solid ground above the water. As they travel along the pathway, they come past a few raised pieces of ground with Re-Koils on them. Soon, they reach another underwater area that they can swim into to find a passage leading through a large structure that blocks their path. The letter G is in the center of the passage, which they can find another wide section of water after. They can find a Koco in this water, and to the right of it, they can discover an area of land. Kiddy Kong can use his water-bouncing abilities to reach a hidden ledge to the top-left of here, which holds a Koin. (Again, if the player has both Kongs, jumping into the killer bees will give the player more vertical distance and thus be able to make the jump.) They head down a solid pathway with a trio of Sneeks and some bananas on it. As they race past the foes, swarms of Buzzes chase them, until they reach the Level Flag.

Right before the first body of water, Kiddy must perform a team up throw for Dixie to enter an invisible Warp Barrel over the middle of the body of water. The Kongs are warped to the area right before the Level Flag. If the Kongs complete the level with the Warp Barrel, the timer reaches the maximum time of 9:59, penalizing the Kongs. This penalty was removed from the Game Boy Advance remake.