“Rebelling against the Kremlings who infest the island, Rattly offers his high-jumping ability to help the Kongs. He can jump much higher than the Kongs, courtesy of his springy tail.”
—Donkey Kong Country 2: Diddy's Kong Quest instruction booklet, page 25

Rattly is a large, green, red-ringed rattlesnake and an Animal Friend of the Donkey Kong franchise. His first appearance was in Donkey Kong Country 2: Diddy's Kong Quest. Rattly is an inhabitant of Crocodile Isle but is described as a rebel against the Kremling Krew.

Rattly's body is coiled up like a spring, which he bounces on to move around. His main attribute is the ability to bounce high. In this regard, Rattly is considered a successor to Winky the Frog from Donkey Kong Country.

In Donkey Kong Country 2: Diddy's Kong Quest, Rattly only appears in a few levels. He is either a ridable or transformable animal buddy. The player(s) as Rattly can Superjump to perform a higher jump. This allows for the player(s) to reach normally inaccessible locations, sometimes to find a level collectible or Bonus Barrel. When moving around as Rattly normally he hops, allowing the player(s) to jump in midair. The player(s) as Rattly can also jump in midair when falling from a platform. Rattly is able to bounce off Zingers without taking damage.

He first appears in Topsail Trouble, where the player(s) start the stage in front of a Rattly Crate. They can optionally use Rattly's assistance to climb the ship mast, up until the No Animal Sign next to the Star Barrel. 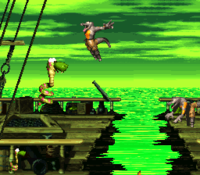 Rattly later appears in Rattle Battle. Unlike in Topsail Trouble, the player(s) are required to transform into Rattly, by entering a Rattly Barrel in a small room at the start. The level requires the player(s) to use Rattly's abilities.

The player(s) can optionally ride Rattly in the Gloomy Gulch level Gusty Glade.

In Toxic Tower, the player(s) are required to transform into Rattly to perform high jumps to escape from the rising toxic waste, up until the Star Barrel, where the player(s) use other animal buddies.

Rattly is used for the final segment in Animal Antics, in which his segment takes place in a jungle.

Two Rattlies on the bridge of Port City

Rattly makes a cameo in Donkey Konga 2. He is among the characters whose artwork appears in Freestyle Zone while the player plays the DK Bongos. Two Rattlies are engraved on a bridge in the "Port City - Foggy Morning" background scene.

Rattly reappears in Donkey Konga 3, where he again is among the characters whose artwork appears in Freestyle Zone while the player plays the DK Bongos.

Rattly the Rattlesnake is referenced in the Metro Kingdom in Super Mario Odyssey, where one of the street signs is named after him. However, his name is misspelled "Rattley".

Rattly the Rattlesnake is referenced in the level Uptown, Downtown in the Nintendo 3DS and Nintendo Switch versions of Captain Toad: Treasure Tracker, where the same street sign from Super Mario Odyssey is named after him. His name is still misspelled.

Rattly appears as an Advanced-class support spirit in Super Smash Bros. Ultimate. The spirit occupies one support slot and increases the fighter's jump height when used. The spirit's puppet fighter is a Yoshi with increased jump power on the Kongo Jungle stage. The track that plays during the spirit battle is an arrangement of "Snakey Chantey" from Donkey Kong Country 2: Diddy's Kong Quest, referencing the level Rattle Battle in which Rattly is playable.

Rattly (shown as Dixie) bounces on a Buzz.