“Have you been to see my husband Cranky? He complains a little, but he does know everything about this island.”
—Wrinkly Kong, Donkey Kong Country 2: Diddy's Kong Quest

Crocodile Isle directly contrasts with Donkey Kong Island, which features a thriving ecosystem and plentiful wildlife. Crocodile Isle has a dark and murky environment with lots of pollution and barrenness, as evidenced by the dead trees, mining, toxic waste, and garbage. This was caused by K. Rool's pollution and waste of natural resources.[4]

A large pirate ship is docked at the rocky coast of Crocodile Isle. A large sculpted crocodile head follows after it, at the very bottom of the isle. An isolated volcanic region and a few mine shafts are hosted within the sculpted head. Most of the lower region consists of swamps: one of them features a massive shipwreck and another has an abandoned, derelict amusement park built upon it. Zinger hives and bramble infestations are also common areas.

The higher altitudes of Crocodile Isle are colder and very windy. This shift occurs in a spooky woods following after the swamps and amusement park. Lastly, K. Rool's Keep appears at the peak and is the highest altitude of Crocodile Isle. Due to its high elevation, there are a few frozen, arctic caverns in the tower.

Crocodile Isle is seemingly in close proximity to Donkey Kong Island to the southeast, as said island is visible from two locations on the isle. A hidden location also appears somewhere in Crocodile Isle, and it does not appear on the main world map, the Lost World. A large volcano-shaped altar, Krocodile Kore, appears in the center of the Lost World, and it serves as the island's core.

Cranky Kong is shown to be knowledgeable about Crocodile Isle, even knowing about the secret Lost World.[5][6] 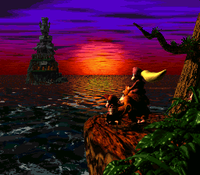 During the events of Donkey Kong Country 2: Diddy's Kong Quest, Diddy Kong and Dixie Kong travel to Crocodile Isle in search for Donkey Kong. If they manage to defeat Kaptain K. Rool a second time, in Krocodile Kore, he falls into Krocodile Kore's volcano, which creates an explosion resulting in the entire Crocodile Isle sinking into the sea. However, K. Rool manages to escape on a raft, laughing. Donkey Kong, Diddy, and Dixie witness all of these events from a distance.

In Donkey Kong Land 2, the story behind Crocodile Isle is a retelling of that from Donkey Kong Country 2, where Diddy and Dixie go to rescue Donkey Kong. As a result of defeating Kaptain K. Rool in the Lost World, the entire Crocodile Isle sinks into the ocean. There are only a few differences with Crocodile Isle: the map layout is reversed, two of the worlds were merged into a volcanic-swamp hybrid, Krem Cauldron, and a single Klubba's Kiosk appears on the main world map, left of Gloomy Gulch.

In Donkey Kong 64, a newly constructed Crocodile Isle appears, now equipped with powerful weapons to aid in the destruction of Donkey Kong Island.

In the obscure Donkey Kong comic Bumm-Badabumm im Urwald, Crocodile Isle never made a direct appearance, though several locations ventured through in the comic, such as a Krochead and a crashed ship-filled swamp, along with the "Lost Land", are obviously based off areas of Crocodile Isle.

Crocodile Isle is mentioned in Animal Crossing: New Horizons by Captain Gullivarrr, in dialogue added to the July 3, 2020 update. If the player finds Gullivarrr, he may say, "Folks be fearin' me buccaneerin' from Crocodile Isle to Keelhaul Key..."

“The home island of K. Rool holds creatures that bite and sting and crush and claw - rats on the shipwrecks, bees in the hives, porcupines in the woods, pufferfish in the sea.”
—Nintendo Power vol. 76, page 26
“King K. Rool now fancies himself a pirate, taking on the title of "Kaptain" and ordering his Kremlings to dress up as peg-legged buccaneers. In the best (worst?) pirate tradition, they've kidnapped Donkey Kong and are holding him for ransom in their lair on Crocodile Isle. Now it's Diddy and Dixie's turn to play hero, swinging, jumping and bopping their way across six massive worlds (each with multiple stages) in search of their hapless comrade!”
—Nintendo Power vol. 79, page 15