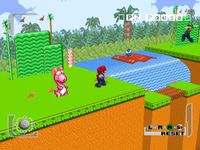 Mushroom Kingdom II is the second Mushroom Kingdom stage in Super Smash Bros. Melee and a returning stage in Super Smash Bros. Ultimate. In Super Smash Bros. Melee, it can be unlocked by collecting the Birdo trophy, while it is available from the start in Super Smash Bros. Ultimate. Despite the name, this stage is actually in Subcon, from Super Mario Bros. 2. The stage has a platform in the middle, and two on the side. A waterfall forms huge gorges that separate the three. Occasionally, logs will fall down the waterfall, creating temporary platforms. A Pidgit will occasionally fly in (with its magic carpet making another platform) and a pink Birdo also appears occasionally, spitting Birdo's Eggs (which can be grabbed and thrown) at fighters. The upper platforms on both sides of the stage however make it easy for the players to self-destruct if they proceed to walk off the screen there or get pushed away by Birdo when she leaves the screen.

In Super Smash Bros. Melee, Luigi's unlock match takes place here, and he is also fought in "Event Match 40: All-Star Match 4" as the second in order of opponents, preceded by Marth and followed by Jigglypuff.

Cherries, grass, Semisolid Platforms, and jars appear in the background of the stage. The whole level has Super Mario All-Stars graphics (though only the ground, logs, and magic carpet are in 3D); these graphics are overhauled for Super Smash Bros. Ultimate, and now use the actual graphics from the aforementioned game, albeit in much less saturated colors. Birdo also now makes the same sound effects it did in Super Mario All-Stars, which was absent in the previous game in the series. Like other stages in Super Smash Bros. Ultimate, for the first time it can now opt for Battlefield and Ω forms, but above a wide waterfall that stretches across the screen rather than in the center in its normal form.