Not to be confused with Giant Bowser.

Giga Bowser is the true final boss of Adventure mode in Super Smash Bros. Melee, and Bowser's Final Smash in all further Super Smash Bros. games. As his name suggests, he is a gigantic version of Bowser, and was created as a throwback to the older "aggressive" look of Bowser from the pre-Super Mario 64 games.[1] He looks more ferocious, with a larger body, a spikier scaled shell, more muscular physique, and a new curve to his lengthened horns. In addition, Giga Bowser is more difficult to battle than his smaller counterpart.

Giga Bowser first debuted in Super Smash Bros. Melee, where the player could face him after completing Adventure Mode on normal or higher difficulty within 18 minutes without using any continues. In the cutscene that follows when the player accomplishes this, Giga Bowser is created when a Bowser trophy falls onto the Final Destination stage, and is then immediately struck by lightning, right after the player defeats the giant Bowser. This revives the trophy, but the energy surge from the lightning causes the strange mutation that turns Bowser into Giga Bowser. Defeating Giga Bowser in Adventure Mode awards the player 100,000 points, along with the Giga Bowser trophy. Additionally, he is one of the opponents in the final Event Match; The Showdown, with Ganondorf and Mewtwo fighting alongside him. 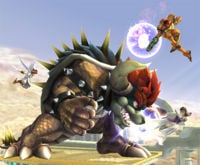 Giga Bowser returns in Super Smash Bros. Brawl as Bowser's Final Smash. Many of Bowser's moves are hugely powered up in this form, and his roar is deeper. However, some of his attacks are actually weaker than that of the regular Bowser (such as the forward smash). He still takes damage from hits, but he does not flinch, making him possible to KO only by hitting him when off-screen, and at the top border of the screen. Giga Bowser's Super Smash Bros. Brawl trophy incorrectly states that he can't take damage at all. Because of his large size, Giga Bowser is able to easily attack and KO an opponent. The duration of this move decreases if Giga Bowser is attacked.

Giga Bowser returns in Super Smash Bros. Ultimate, as Bowser's Final Smash. However, unlike in the past installments of the series, instead of being a fully controllable character, Giga Bowser moves into the background and prepares to hit opposing fighters with a powerful punch. Meanwhile, the player can target the opponents with a reticle. If Giga Bowser successfully strikes a fighter that is high on damage, they are instantly Screen KO'd.

Giga Bowser is also fought as a boss at the end of Mario and Captain Falcon's Classic Mode, after Bowser transforms into him. Sephiroth also fights Giga Bowser in his Classic Mode route as a non-final boss. He also appears as a boss in the World of Light mode, where he is located in the Molten Fortress sub-map. Defeating him unlocks Bowser as a playable character and damages Galeem's shield. It also awards the player with Giga Bowser's spirit, which strengthens all neutral fire attacks when used on a fighter.

Giga Bowser's colors have been slightly altered again to even more resemble those of his normal form, though his face is still turquoise. His scales are also much more smooth than in previous appearances.

Oddly, Giga Bowser is unaffected by Metal Boxes, as he does not gain a metallic appearance, even when players are playing a Metal Special Smash. Similarly, Super Mushrooms, Poison Mushrooms, and Lightning won't affect Giga Bowser's size, but his size can be altered by playing a Giant or Tiny Special Smash.

On a side note, while Giga Bowser is huge in size, his overall attack power is surprisingly less powerful than that of a Bowser who acquires a Super Mushroom. This is especially notable with the forward smash.

In Super Smash Bros. Ultimate, Giga Bowser grows to an even larger size than in his past appearances, and his punches can result in instant KOs when aimed just right.