“I have been waiting for this moment. Now, I shall give Smash despair.”
—Sephiroth, "The One-Winged Angel!" trailer for Super Smash Bros. Ultimate

Sephiroth is the main antagonist from Square Enix's Final Fantasy VII. He is a former renowned member of an elite fighting force called SOLDIER, who became a renegade and went on a murderous rampage after discovering the circumstances of his existence. Sephiroth would then go on to become a world-ending threat for Cloud Strife and his allies to stop. He appears in Super Smash Bros. Ultimate as a downloadable character. Despite having almost all of his home series appearances dubbed in English, and a few earlier appearances dubbed in additional languages, Sephiroth, like his rival Cloud, speaks only Japanese in Super Smash Bros. Ultimate, similar to Marth and Roy prior to the game; he is voiced by Toshiyuki Morikawa, his Japanese voice actor from Final Fantasy VII: Advent Children onward.

Sephiroth was released in Super Smash Bros. Ultimate as the third fighter of Fighters Pass Vol. 2, following Min Min and Steve. He is the third fighter from Square Enix; following Cloud and Hero and preceding Sora. During The Game Awards held on December 10, 2020, he was announced as the fighter for Challenger Pack 8. A follow-up broadcast hosted by Masahiro Sakurai on December 17, 2020, further showcased his moves as well as his home stage, the Northern Cave. The pack released officially on December 22, 2020, though from December 17 until its release, if the player purchased the individual pack or Fighters Pass Vol. 2 and updated the game to version 10.0.0, they could partake in a "Sephiroth Challenge" event, where they could fight Sephiroth in a Stamina battle on the Northern Cave stage on Easy, Normal, or Very Hard difficulty. If the player defeated Sephiroth on any difficulty, they would unlock him, the stage, and its music early.[1]

The reveal trailer for Sephiroth takes place during the events of the adventure game mode, World of Light, emerging during a fight between various characters and Galeem and several Master Hands. Unlike all of the other characters in-game, he is the only playable character that seems to not join forces with the cast; however, he cuts Galeem in half right before his appearance, seemingly being against both separate parties. Cloud then recognizes Sephiroth upon his appearance. After brief gameplay footage, Sephiroth is seen attempting to stab through Mario (a reference to his actions towards Cloud during the Nibelheim Incident flashback in the original game as well as a similar action in their duel in Advent Children Complete), which is then interrupted by Cloud, and the two begin swordfighting.

As a fighter, Sephiroth utilizes his sword, Masamune, to fight. The weapon possesses a long range that surpasses that of most other swords, and the amount of damage and knockback dealt is dependent on which part of the blade hits the target. When performing a slash, the middle portion of the blade deals the most damage and knockback, while stabs deal the most damage and knockback on the sword's tip. However, while the sword attacks with the Masamune can be powerful when they connect, they do have sourspots that reduce their potency, and are also hindered by start-up and ending lag. On a side note, the down smash is notable in that it's stronger when it stabs the ground, and it can deal high amounts of shield damage as a result.

Sephiroth's down aerial, known as Hell's Gate, has him dropping downwards, with his Masamune positioned straight down. It can meteor smash aerial targets with a clean hit, and can even hit fighters whom are trying to grab stage ledges. However, while using the attack, Sephiroth risks self-destructing if there's no ground to land on.

Sephiroth possesses a unique fighter ability, known as the Winged Form. When it activates, a single black wing will grow on the right end of Sephiroth's back, and he gains various benefits from the form as well. The conditions that are required for the Winged Form to activate depends on how much damage Sephiroth currently has, along with his overall position in a match. The greater the disadvantage, the sooner the wing will grow, but if Sephiroth has an advantage over his opposition, then it becomes harder for the Winged Form to activate. The Winged Form has limitations on how long it lasts, which depends on Sephiroth's current overall position, the amount of damage that he has dealt, and the amount of KOs that he has made. When the form disappears, it can't be activated again until Sephiroth gets KO'd.

The Winged Form offers various improvements to Sephiroth, which include increased overall mobility, greater damage dealt, an extra midair jump, and damage-based heavy armor periods for his smash attacks. However, the second midair jump covers less vertical distance than the first. The following table displays all the multipliers that the Winged Form offers.

In terms of his attributes, Sephiroth is a rather slow walker, walking slower than Bowser, while his running is slightly faster than that of Hero. Sephiroth is also a rather fast faller, as he falls slightly slower than Greninja, Simon, and Richter. But his most notable attribute is his weight, which is quite low when compared to most other fighters; Sephiroth shares his weight with Kirby, Pikachu, Mewtwo, and Olimar, making him the lightest villain fighter in the game.

Sephiroth's neutral special, Flare, is a projectile attack that can be charged up, but the charged can't be held onto. When uncharged, Flare travels a good distance, but packs the least amount of power. Charging up Flare enough changes it into Megaflare, which is stronger, but covers less distance. And finally, when Flare is fully charged, it becomes Gigaflare, which packs the most power and knockback of all Flare variants, but coves the least amount of distance.

It should be noted, however, that because of how long it takes for Sephiroth to fully charge Flare, he's left very vulnerable during the charging phase, and is not really able to unleash Gigaflare in the air, due to his falling speed. Also, all charge levels of Flare can be reflected and absorbed, but because Megaflare and Gigaflare deliver multiple hits, instead of a single strong hit, absorbing them with Ness's PSI Magnet is not very rewarding; the initial hits deal very little damage.

Sephiroth's side special, Shadow Flare, has him snapping his fingers to create a thin shadowy projectile. If it hits anyone, it will create shadow orbs that orbit around the targeted fighter. The longer the attack is charged, the more shadow orbs that will be created, but a single fighter can only have up to five shadow orbs orbiting.

Shadow Flare is easily spammable, as it can be used frequently without any kind of retaliation, and can put opposing fighters in potentially bad positions as well. However, it is not safe to use at close range, due to dealing low shield damage, and it doesn't push back fighters very far either.

Blade Dash is Sephiroth's up special move, serving as his recovery move. When used, Sephiroth will travel a set distance, with the angle being dependent on which direction the Control Stick is tilted. The attack can deal a single hit to any fighter caught in its path.

If the player holds onto the special move button, Blade Dash will change into Octaslash. When compared to Blade Dash, Octaslash covers slightly more distance, and Sephiroth will deal up to eight hits on opponents, instead of a single hit. However, Octaslash's landing lag is much greater than that of Blade Dash, and it can't snap onto stage ledges.

Scintilla is Sephiroth's down special move. It serves as a unique counterattack move, with Sephiroth creating a honeycomb-like barrier. The barrier can block attacks, while retaliating right back with an attack that deals multiple hits. But even if the barrier doesn't block an attack, it can still deal minimum damage on opponents after the counter window deactivates.

However, Scintilla is useless against attacks that hit Sephiroth from behind. It also can't reflect projectiles, and there is a limit to how much damage the barrier can take. If the barrier blocks an attack that deals 25% damage or more, it'll end up breaking, negating whatever damage Sephiroth would've taken. Sephiroth will also stagger a bit if the barrier is broken.

The counterattack itself has its own drawbacks. It is treated as a projectile attack, and as a consequence, can be reflected right back at Sephiroth if fighters either hit the barrier with a reflecting move, or are wearing the Franklin Badge. 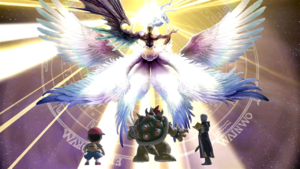 Safer Sephiroth during the Final Smash.

Supernova is Sephiroth's Final Smash. When the move is activated, Sephiroth swipes his Masamune in a wide arc. If at least one opponent is hit, a cutscene is initiated. Sephiroth turns into his final form, Safer Sephiroth, and begins an attack resembling his Supernova ability in Final Fantasy VII, summoning Meteor to wipe out several planets.

When the cutscene is over, fighters hit by the attack will take high damage, be launched, and end up receiving a random effect. The random effect that Supernova inflicts on fighters can range from being put to sleep, growing a damaging flower, reversed controls, entering a shield break state, being slowed down, or being launched a greater distance than normal with a darkness effect. However, some effects will never happen if the targeted fighters are off-stage when the Final Smash is executed.

Up to three fighters can be affected by this Final Smash.

Sephiroth shares this stock conversation with all other Fighters Pass characters. It was originally used for Mewtwo, Lucas, Roy, Ryu, Cloud, Corrin, and Bayonetta in Super Smash Bros. for Wii U, who are downloadable fighters in that game.

Sephiroth coverage on other NIWA wikis: