Onett is a stage in Super Smash Bros. Melee. It was originally Ness's hometown and starting point in the game EarthBound located in Eagleland. It is a default stage in Super Smash Bros. Melee, and is the home stage to Ness. As such, all 1-P mode battles involving Ness are fought either here or Fourside. This includes Classic, Adventure, and All-Star. There are a few features here, the most deadly being the cars on the bottom of the stage, that will ram into the players if they don't get out of the way in time. There are a couple of trees above the left house, which the player can jump on to escape their foes. There is also a three-story medication store with a billboard on the top that falls if it is stepped on too much. When a player throws an explosive at a car or gets hit by it, the car spins out of control.

In Super Smash Bros. Melee, Onett has an alternate track called Mother 2 (the Japanese name of EarthBound). It is the overworld solo music from the original Mother, and it also resurfaces in EarthBound as the music for Ness's house after Ness receives the Sound Stone near the beginning of the game. 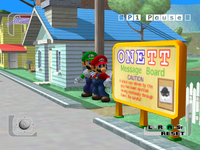 Onett coverage on other NIWA wikis: