“Pichu isn't a professional at charging electricity like Pikachu. The slightest touch can make Pichu discharge its electricity and shock itself.”
—Tips, Super Smash Bros. Ultimate

Pichu is a playable fighter in Super Smash Bros. Melee. It is an unlockable character, unlocked by beating Event Match 37: Legendary Pokémon, or by playing 200 Melee matches. Afterward, Pichu must be defeated in a match on Pokémon Stadium.

Pichu is the only character in the game to have two taunts, one for each direction it is facing. It is voiced by Satomi Kōrogi in both English and Japanese, who does its voice in the Pokémon anime.

Pichu is one of the five Super Smash Bros. Melee fighters that did not return as a playable character in Super Smash Bros. Brawl (the other four being Dr. Mario, Young Link, Mewtwo, and Roy). However, the player can get a trophy of Pichu by clearing All-Star Mode without continuing.

Pichu, after being absent as a playable character in every Super Smash Bros. game since Melee, returns as an unlockable playable fighter in Super Smash Bros. Ultimate. Like all other fighters in the game, it has a Final Smash. Pichu's Final Smash, Volt Tackle, functions similarly to Pikachu's identically named move, although Pichu's version does recoil damage to itself, but it is also stronger. Pichu gains a new on-screen appearance and two new taunts, and Pichu can speak during some animations.

Compared to its appearance in Super Smash Bros. Melee, Pichu is faster, its aerial attacks have less landing lag, its short hop timing is reduced, it is heavier, its moveset has attacks that knock opponents back farther, many of its attacks deal more damage to opponents, and it does less damage to itself with electrical attacks (said attacks now cause around 0.4% damage each as opposed to 1-6%). Some of Pichu's attacks, however, are weakened.

Thunder Jolt is Pichu's standard special move, which it shares with Pikachu. This move is notable for not having a counterpart from the Pokémon games. Similar to Pikachu, Pichu launches a ball of electricity rotating across the stage until it collides with an opponent. The attack can travel off the sides of the stage, as well as along walls if they are not too steep, but not along the underside of fall-through platforms. When the attack is used in the air, it begins as a larger, more powerful ball of electricity until it hits the ground. Like Pichu's other special moves, however, this move inflicts damage to itself whenever it is used; the recoil effect also carries over to Kirby if he copies Pichu and uses this move.

Skull Bash is Pichu's side special move, shared with Pikachu. The attack is based upon the Normal-type move from the Pokémon series. Like Pikachu, Pichu charges up an attack before launching head-first across the screen, attacking any opponent it hits with a headbutt. The move can be charged by holding down the special move button, which increases the range and power of the move. Pichu's version of the move is able to be charged for longer, allowing it to deal more damage and gain more distance, but like its other special moves, it damages Pichu when used. 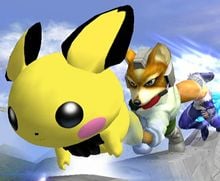 Agility is Pichu's up special move. The move is similar to Pikachu's Quick Attack, allowing Pichu to warp in the direction held on the control stick in a burst of speed, and again if the direction is changed during the move. This move, however, like Pikachu's move in the original Super Smash Bros., does not damage opponents, but instead deals recoil damage to Pichu, with the second movement inflicting more than the first. 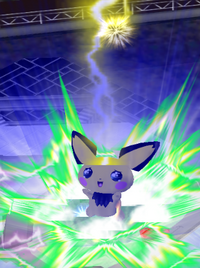 Thunder is Pichu's down special move, shared with Pikachu and based on the Electric-type move in the Pokémon series. Pichu calls down a bolt of lightning that appears from a cloud above it and strikes any fighters in its path to damage them. If the bolt strikes Pichu, any nearby fighters are damaged by it as well. Unlike Pikachu's Thunder, Pichu's version is able to hit multiple times, making the complete strike stronger than Pikachu's, though the bolt hitting Pichu deals less damage to opponents and instead damages Pichu itself.

In Super Smash Bros. Ultimate, Pichu gains the Volt Tackle as its Final Smash. Upon activating it, Pichu will dashes forward with an electric tackle and if it connects, it move around the stage to deal more damage and ends with an electric blast at the center of the stage, similar to Pikachu's Final Smash. The only difference between Pichu's Volt Tackle and Pikachu's, is that the former's version of the move is stronger and deals recoil damage to the user.

"Pichu is back after 17 years! Pichu's electric attacks have greater range and do more damage than its other attack types – but they also damage Pichu."

Pichu coverage on other NIWA wikis: