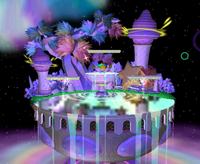 Fountain of Dreams is a stage appearing in Super Smash Bros. Melee, resembling the area from the Kirby series. The location is a recurring place in the series, as it houses the Star Rod, the single most important item in said series. It is available from the start, and serves as Marth's stage (with the Fire Emblem track playing) when battling against him in the Classic or All-Star modes and when battling to unlock him, due to the game featuring no Fire Emblem stages.

Its appearance is similar to Battlefield. There are three floating platforms in the stage, with the two lower platforms occasionally sinking and rising from the water. The bottom of the stage can also be Wall Jumped off of, allowing for certain characters to use it as a recovery.

Fountain of Dreams coverage on other NIWA wikis: