“Once in the air, Jigglypuff can jump five times, allowing it to move much quicker than running on the ground. Try to keep opponents in the air and build an advantageous scenario for yourself during battles.”
—Tips, Super Smash Bros. Ultimate

Jigglypuff is a Normal/Fairy-type Pokémon (a pure Normal-type Pokémon prior to the Fairy type's introduction in Generation VI) from the Pokémon series. Its first appearance was in the Japanese Pokémon Red and Pokémon Green, which later became the international Pokémon Red Version and Pokémon Blue Version. Classified as the Balloon Pokémon, Jigglypuff evolves from Igglybuff and into Wigglytuff. 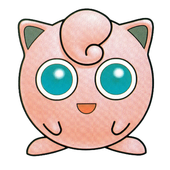 Jigglypuff was designed to be the weakest character in the game.[1] Jigglypuff is the lightest playable character; while it has up to five midair jumps, tied with Kirby for the most, Jigglypuff can also be launched the easiest. In addition, when Jigglypuff's shield breaks, it is launched higher into the air than any other character, potentially KOing it. Jigglypuff also has a high air speed and the lowest falling speed, but also has low walking and dashing speeds. Its attacks are also slow and weak.

Jigglypuff's neutral special is Pound, in which it slaps its opponents. Its up special is Sing, which puts nearby opponents to sleep, and its down special is Rest, which sends any opponents close enough flying but puts Jigglypuff to sleep.

For unknown reasons, the Japanese version of the game has both "Purin!" and "Jigglypuff!" announcements. 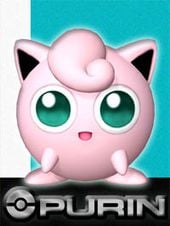 Jigglypuff returns in Super Smash Bros. Melee. According to its page on the Japanese website, Sakurai was torn over whether to have Jigglypuff return or not, but kept it so as to not leave behind fans of the character.[1] Like in the original Super Smash Bros., Jigglypuff can be unlocked by clearing Classic or Adventure with any character, or by playing 50 Melee matches, and then defeating it on Pokémon Stadium. 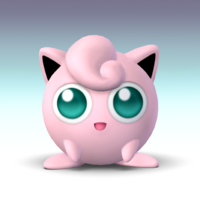 In Super Smash Bros. Brawl, Jigglypuff returns as an unlockable character once again. It can be unlocked by clearing at least 20 Event Matches after finishing The Subspace Emissary, playing 350 Brawl matches, or by having it join the party in The Subspace Emissary. Similar to the previous game, Jigglypuff (along with Wolf and Toon Link) was nearly cut from the game due to time constraints.[2]

While Jigglypuff's general moveset is unchanged, it has been given a Final Smash, Puff Up. Jigglypuff increases in size dramatically, bouncing players off of it at great speed.

Like Toon Link and Wolf, it makes a rather minor Subspace Emissary appearance, and is the only veteran character who does not appear in the main story of the Subspace Emissary. After finding a red door in The Swamp stage, the player will be taken to Pokémon Stadium 2 and fight Jigglypuff in a one-stock match. Once defeated, it will join the player's party. 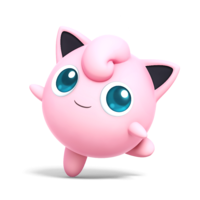 Jigglypuff appears as an unlockable playable character in Super Smash Bros. Ultimate. Compared to Super Smash Bros. for Nintendo 3DS / Wii U, it moves faster on the ground and in the air, and many of its attacks are more powerful. In addition, Jigglypuff makes an angry expression during its Puff Up move.

Jigglypuff is not seen when the fighters oppose Galeem for the first time. However, it is hit by one of Galeem's beams of light and imprisoned in the World of Light like the other non-DLC fighters (except for Kirby), and multiple puppet fighters of it are created. The actual Jigglypuff is eventually defeated, awakening it, and it joins Kirby's team in the battle against Galeem and Dharkon.

Pound in Super Smash Bros. for Wii U

In Super Smash Bros. for Nintendo 3DS / Wii U, the first custom variant for Pound is Sideways Pound, which knocks opponents horizontally, similar to the original Super Smash Bros., but it also deals less damage, and cancels all of Jigglypuff's momentum. The second variant is Pound Blitz, which sends Jigglypuff sliding across the ground a further distance, and deals multiple hits while going through opponents. 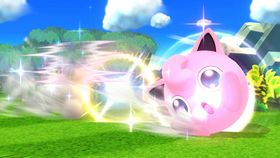 Rollout in Super Smash Bros. for Wii U

Rollout is Jigglypuff's standard special move starting with Super Smash Bros. Melee, replacing Pound, which is now its side special move, in Super Smash Bros., and based upon the move in the Pokémon series. By holding down the special move button, Jigglypuff charges the move by rolling in place, and starts to roll forward in the direction it was facing before charging, the roll lasting as long as the move was charged. The move deals the most damage and knockback at maximum charge, while it does not have any effect on opponents at minimum charge. The player can also turn around while rolling. If Jigglypuff hits an opponent while rolling, it automatically stops, bouncing into the air before returning to its normal position.

In Super Smash Bros. for Nintendo 3DS / Wii U, the first custom variant for Rollout is Relentless Rollout, which charges faster, moves faster, and deals multiple hits, never stopping after hitting an opponent, though it cannot be controlled as easily. The second is Raging Rollout, which is faster and deals more damage, but takes longer to charge and cannot be turned around. 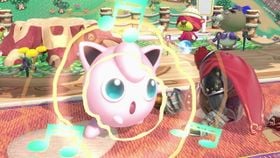 Sing is Jigglypuff's up special move, based on the Normal-type move recurring throughout the Pokémon series. Unlike other up special moves, Jigglypuff does not get sent into the air, but instead sings, sending out sound waves that cause any opponents caught in them to fall asleep like in the games of origin. In Super Smash Bros., opponents with less damage remain asleep for longer, while in Super Smash Bros. Melee onward, opponents with more damage remain asleep longer, but can wake up faster by tapping the Control Stick or Circle Pad rapidly.

In Super Smash Bros. for Nintendo 3DS / Wii U, the first custom variant for Sing is Hyper Voice, another move from the Pokémon series, which is an attacking variant that has greater range and deals greater damage as it goes on. Unlike with Sing, Hyper Voice can affect airborne targets, but Jigglypuff is still vulnerable while using this move. The second is Spinphony, where Jigglypuff creates three sound waves that can flip any opponents who get hit. However, the attack takes a very long time to execute, as its startup time and execution period are both very slow, and the sound waves deal very little damage to opponents as well. 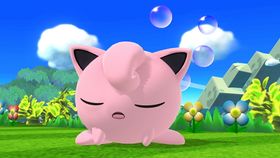 Rest in Super Smash Bros. for Wii U

Rest is Jigglypuff's down special move, based on the move from the Pokémon series. When used, Jigglypuff flinches before falling asleep and waking up several seconds later, leaving it open to attack. If used close to an opponent, however, they are launched into the air. In Super Smash Bros. Melee, this attack has a flame effect, while in Super Smash Bros. Brawl onward, this was changed to giving the opponent a flower on their head to increase their damage; the angle the attack launches at was also changed from a more diagonal one in the previous two games to a near-vertical one.

In Super Smash Bros. for Nintendo 3DS / Wii U, the first custom variant for Rest is Leaping Rest, which sends Jigglypuff into the air before it falls asleep. The second is Wakie Wakie (spelled Wakey-Wakey in the British English version), which causes Jigglypuff to rest for a shorter time, exploding when it wakes up; as it sleeps it also has a vortex surrounding it that pushes away opponents. The explosion also causes recoil damage to Jigglypuff when it wakes up. 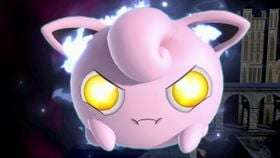 Puff Up is Jigglypuff's Final Smash. When activated, Jigglypuff begins to inflate itself to a very large size, encompassing a large portion of the stage. Opponents that make contact with Jigglypuff are pushed to the side. Once Jigglypuff reaches its peak height, opponents around it are slightly damaged and launched to the side. Jigglypuff then rapidly shrinks to its normal size.

Strangely, the trophy showing Puff Up in Super Smash Bros. for Wii U shows Jigglypuff at its large size, but retaining the original color of its eyes. When using the move during battles, Jigglypuff's eyes are yellow the entire time. Additionally, the pitch of Jigglypuff's voice and sound effects during the move is altered based on the speed of the match, which can be adjusted in Special Smash or Training Mode. Jigglypuff's Final Smash is the only one with this property.

Artwork of Jigglypuff from Pokémon Red Version and Pokémon Green Version can be used as a stamp in Mario Artist: Paint Studio.

Jigglypuff appears as one of the Costume Mario costumes in Super Mario Maker, which can be unlocked either by using the Jigglypuff amiibo or by clearing 100 Mario Challenge on Normal difficulty or greater. Its sprite is based upon the overworld sprite used in the Nintendo DS Pokémon games. Like the other Pokémon costumes, Jigglypuff does not have any altered sound effects.

The Balloon PKMN with the big, round eyes. It sings a soothing melody, sending those that hear it to sleep. When mad, it puffs itself up. As a Balloon PKMN, its body is light, weak, and easy to knock away.

"Jigglypuff can jump 5 times in the air and can move faster in the air than on the ground. Use Jigglypuff's great aerial ability to overwhelm your opponent! If you manage to land the down special Rest, you can powerfully launch your opponent."

Jigglypuff coverage on other NIWA wikis: