Incineroar appears as an unlockable playable character in Super Smash Bros. Ultimate. Its debut trailer was paired with Ken Masters's trailer, where the two briefly fight on the Boxing Ring stage. Prior to openly revealing itself, it also briefly wore a white hoodie when attacking Ken. Incineroar is unique in that it poses after performing a special move, though these poses can be canceled at any point and thus do not affect the fight.

In an interview with Nintendo Dream, Masahiro Sakurai revealed that during the development of Super Smash Bros. Ultimate, Decidueye was almost chosen as the new Pokémon fighter, but Incineroar was chosen instead, with Sakurai stating that he wanted to include a professional wrestler character.[1][2]

Incineroar is a super heavyweight fighter (being heavier than Kazuya but lighter than Ganondorf, while having the same weight as Pokémon Trainer's Charizard) with highly powerful attacks, yet very sluggish mobility to boot. In fact, Incineroar is notorious for having the slowest walking and dashing speeds in the game. Like Sonic the Hedgehog, Charizard, and Inkling, Incineroar receives minor damage while swimming, seemingly as a reference to its weakness to Water-type Pokémon in the Pokémon series. Fittingly, the overwhelming majority of Incineroar's attacks consist of professional wrestling moves, extending to its special moves.

Incineroar's neutral special move is Darkest Lariat, which involves it performing a series of discus lariats that can block projectiles. Its side special is Alolan Whip, in which it lunges at an opponent in order to Irish whip them into wrestling ring ropes and, depending on when the special button is pressed, subsequently perform a lariat, a back body drop, or collide with the opponent. Incineroar's up special is Cross Chop, which has it leap vertically into the air and descend diagonally to perform a cross chop that causes a small explosion upon hitting a surface. Lastly, its down special is Revenge, a type of counterattack that makes Incineroar receive minor damage in exchange for retaliating with a small burst of flame and making its next attack much stronger.

Darkest Lariat is Incineroar's standard special move. When used, Incineroar spins for a few seconds and hits any player nearby with a series of discus lariats. It is very quick and hits multiple times, with its initial hit being very strong and each subsequent hit being weaker than the last. Darkest Lariat also grants varying degrees of invincibility to Incineroar, which makes it capable of interrupting an opponent's attack. Although it has quick start-up lag, its lengthy duration can make it somewhat unsafe without proper timing, especially while off-stage. In addition, Darkest Lariat's initial hit is the only one capable of KOing reliably, whereas its subsequent hits are better suited for pressuring a shielding opponent. 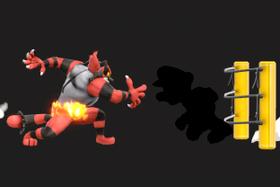 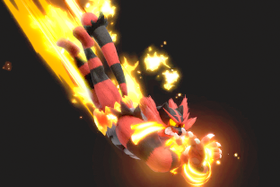 Cross Chop is Incineroar's up special move. When used, Incineroar leaps upward to perform a Cross Chop, and then descends to perform another one that causes an explosion if its descending hit is still active and makes contact with a solid surface. The explosion is powerful enough to KO quite reliably, while its descending hit KOs even earlier. It can be angled slightly and, like Alolan Whip, does not render Incineroar helpless. Although Cross Chop does not cause helplessness, its diagonal travel angle and high ending lag make unsafe to use unless it is performed very high in the air. 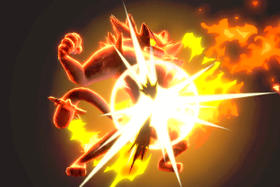 Revenge is Incineroar's down special move. When used, Incineroar readies itself for an incoming attack and, upon being hit, will emit a small burst of flames, receive significantly less damage, and strengthen its next attack. Incineroar's stored strength boost is visually indicated by its fur radiating an orange glow. Revenge is capable of stacking boosts, with a single boost lasting for approximately 1 minute. However, a boost's duration will shorten if Incineroar misses an attack, while the boost is lost outright if Incineroar is thrown or receives 36%. Although Revenge is used to strengthen an attack, the boost is not utilized when using neutral attack's first two hits or Cross Chop's ascending and non-meteor smash descending hits. 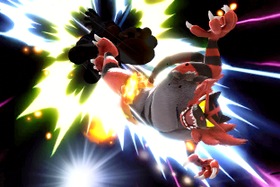 Max Malicious Moonsault is Incineroar's Final Smash. When used, Incineroar activates its Incinium Z and lunges forward in an attempt to grab an opponent, similarly to Alolan Whip. If successful, the opponent is Irish whipped into wrestling ring ropes and Incineroar uppercuts the rebounding opponent upward. Incineroar then proceeds to dropkick them even further upward, uppercuts them again, and then concludes with a diving battering ram that causes a massive explosion upon landing back on-stage. Max Malicious Moonsault is powerful enough to KO at extremely low percentages, and will damage any bystanders as well.

Incineroar coverage on other NIWA wikis: