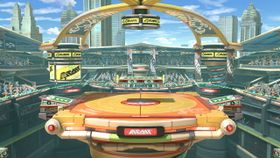 A front shot of the stage

Spring Stadium is a downloadable stage that is based on Spring Man's home stage from ARMS. It was released as the first stage of Fighters Pass Vol. 2 in Super Smash Bros. Ultimate alongside Min Min on June 29, 2020.

The main part of the stage is square and is similar in size to Final Destination and Battlefield. The background of the stage has a large cheering crowd and electronic billboards that display images of different fighters from ARMS. Three platforms similar to Trampolines that allow fighters to jump high in the air appear on the stage, one on the left and right side and one in the center. An arched ceiling is above the stage, which fighters can use to bounce off and avoid being KO'd. If players have items turned on, drones will fly onto the stage with a metallic crate or capsule that fighters must destroy to obtain the item.