Min Min is a fighter character originating from ARMS for the Nintendo Switch. She is a martial artist who is one of few people in the world with ARMS, a phenomenon that causes the person's arms (or on some occasions, other body parts) to mutate into long, stretchy material. She battles in the ARMS League to promote her family's ramen restaurant, Mintendo Noodle House.

On March 26, 2020, it was announced that the first DLC fighter from the Fighters Pass Vol. 2 for Super Smash Bros. Ultimate would be from ARMS, although the identity of said representative would not be revealed until their release in June.[1] On June 22, 2020, the representative was revealed to be Min Min, and it was announced that she would be released alongside Spring Stadium via an update available June 29, 2020.[2] Prior to her inclusion, Min Min also appeared as a spirit in the game. Min Min is the first character to already have a spirit before appearing as a fighter; she would later be followed in this by Pyra / Mythra.

Min Min is a ranged fighter who utilizes her ARMS in combat. Her ARMS possess significant reach and lack hurtboxes, allowing Min Min to attack safely at a distance. However, Min Min's ARMS are burdened with sluggish attack speed and require precise aiming because of their hitboxes being located only on her ARMS' "fists". Like in ARMS, Min Min also utilizes kicks as part of her moveset.

Min Min has three types of ARMS that she can use in battle, all of which can be swapped out (albeit for her right ARM only): Ramram, a chakram that is weak, yet very maneuverable; Megawatt, a large, studded metallic sphere that exchanges range and speed for considerable power; and Dragon, which is fittingly shaped like a dragon's head and is effectively the middle ground between Ramram and Megawatt in regard to range, speed and power. Each of these ARMS also possess distinct secondary properties: sufficiently charging Ramram and Megawatt will result in them being set aflame and discharging electricity, respectively, whereas Dragon is capable of firing a short-ranged laser beam when the attack button is held, with the laser being further strengthened after being sufficiently charged. The Dragon ARM is Min Min's left ARM at all times and is uniquely capable of being powered up for approximately 20 seconds upon successfully throwing an opponent or while having access to her Final Smash.

Min Min is one of the lighter heavyweights in the game, being lighter than Snake, R.O.B., and Banjo & Kazooie, but heavier than Ryu and Ken, while having the same weight as Link, Yoshi, Captain Falcon, and Mii Gunner.

She also briefly appears in Kazuya Mishima's debut trailer, where the titular character tosses her into a lava flow, and also promptly kicks her ARM off the cliff when it still latches on. 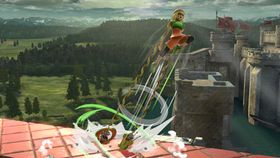 Min Min's up special move changes depending on whether she executes it on the ground or in the air. When used on the ground, Min Min uses ARMS Jump to launch herself into the air. Although it does not damage opponents, ARMS Jump propels her fairly high in the air and briefly renders her intangible, both of which make it useful for evading close-range pressure. ARMS Jump can also be charged, which increases both its jump height and intangibility frames. 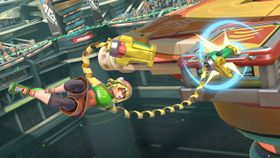 When used in the air, Min Min uses ARM Hook to extend her ARM upward; this can be used to grab a nearby edge to recover or damage an opponent, the latter of which is further amplified when her boosted Dragon ARM is active. 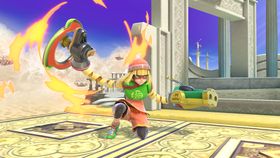 ARMS Change is Min Min's down special move, which lets her cycle between her three ARMS on her right hand. Its operation is similar to Pokémon Trainer's Pokémon Change; she starts off with Ramram, followed by Megawatt, and then Dragon before cycling back to Ramram.

When ARMS Rush is initiated, she reaches out in front of her and any opponents caught in her range will be attacked by the base roster of ARMS before being finished off by Min Min.

Min Min shares this stock conversation with all other Fighters Pass characters. It was originally used for Mewtwo, Lucas, Roy, Ryu, Cloud, Corrin, and Bayonetta in Super Smash Bros. for Wii U, who are downloadable fighters in that game.