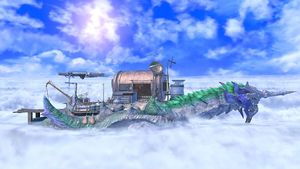 Cloud Sea of Alrest as it appears in Super Smash Bros. Ultimate

Cloud Sea of Alrest is a downloadable stage that appears in Super Smash Bros. Ultimate, and is based on the Cloud Sea from Xenoblade Chronicles 2. It was released alongside Pyra and Mythra on March 4, 2021.

The stage takes place on top of Azurda as he floats through the sky. Other Titans fly past during the match, those being Goldmouth, Gormott, Uraya, Mor Ardain, Genbu, and Indol. A floating platform can be found on the left side of the stage, and Azurda’s neck acts as a slope on the right side. He can change the angle of this slope by raising and lowering his head, or turn his head to look at the titans passing by, shrinking the size of the stage. Additionally, Azurda provides commentary during the battle, such as when a fighter is KO'd or a Titan appears in the background.

Various characters from Xenoblade Chronicles 2 make cameos in the background, those being Nia, Dromarch, Tora, Poppi α, Mòrag, Brighid, Zeke, and Pandoria. These characters change whenever the stage is loaded.

Cloud Sea of Alrest coverage on other NIWA wikis: