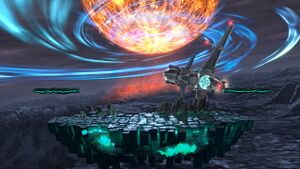 Northern Cave as it appears in Super Smash Bros. Ultimate

Northern Cave is a downloadable stage that appears in Super Smash Bros. Ultimate, and is based on the location of the same name in Final Fantasy VII. It was released alongside Sephiroth in Challenger Pack 8 of the Fighters Pass Vol. 2 on December 22, 2020. Players who had purchased the pack prior to its release date were able to access the stage as soon as December 17, 2020, by completing the Sephiroth Challenge.

The stage comprises a main platform with two small platforms at its edges. Its background presents itself as a tour through many areas within the final events of Final Fantasy VII. The stage begins outside the crater, where the Highwind can be seen flying nearby. It then gradually descends into the crater for a glimpse at the floating rocks on which Jenova∙SYNTHESIS is fought. Heading deeper into the planet, the powerful magic spell Holy can be seen in its sealed state. Holy then activates, and begins to shoot out from the crater. The stage follows the Highwind, quickly escaping the crater as Holy flies out in an attempt to stop Meteor, which is destroying Midgar. Finally, the Lifestream emerges from the planet and pushes Meteor back to allow Holy to destroy it.