This article is about Peach's parasol tool. For other uses, see Peach Parasol or Parasol (disambiguation).

Peach's Parasol (also called Peach's Umbrella) is what Princess Peach uses to defend herself and to glide in the air. In some games, it replaces and acts like how she uses her dress to glide. Baby Peach also uses this parasol.

Her parasol first appears in Super Mario RPG: Legend of the Seven Stars, where it is a weapon able to be purchased from the shop in Seaside Town after Yaridovich is defeated, and colored blue. It has an attack power of 50 points, with a deviation of five points. Functionally, it is similar to a hammer, though instead of a second strike, it opens up when a timed hit is performed. She earlier uses a different, pink one to sneak out of Mushroom Castle; Mario is later shown using this one (or another of the same color) when Mallow is reunited with his mother and father.

Peach using her parasol in Super Smash Bros. for Wii U 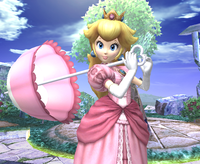 Peach posing with her parasol during her up taunt in Super Smash Bros. Brawl

Peach with her parasol in Super Mario Sunshine

Peach uses this parasol in Super Mario Sunshine to protect her from the dangerous heat, and she is also seen floating down with it in the ending.

Peach's parasol makes an appearance in Super Mario Galaxy 2, where if the player attempts to shoot Star Bits at or jump on the princess, she will use her parasol to guard.

Peach's parasol makes a small cameo in Super Mario 3D Land, where she whacks a Goomba Tower with it, as shown in the letter Mario gets before starting World 6. The sound effects indicate she obtains an extra life.

Peach's parasol appears in Super Mario Maker when her costume is selected. It appears while she's jumping and when performing her unique pose.

The parasol Peach uses in Super Princess Peach actually has a mind of its own. It is implied in-game that this parasol was once a human being until two sorcerers' magic transformed him. She can whack enemies with him and give him various upgrades. Perry can even eat enemies to refill the Vibe Gauge.

Baby Peach uses her parasol in Yoshi's Island DS, where it's her special move. Yoshi can improve his flutter jump with it, and makes it easy to ride winds. 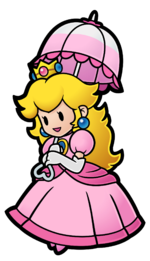 The parasol appears in Super Paper Mario, where Peach can use it to float and defend herself while crouching. In later games, the parasol has retained its design from this game.

Peach with her parasol in Paper Mario: Color Splash

In Paper Mario: Color Splash, Peach can be seen holding the parasol when she first arrives at Port Prisma, along with in official artwork for the game. In the digital manual, when asked where she keeps the parasol, Peach claims that it is none of the viewer's business.

Peach's Parasol as a glider in Mario Kart 7

In Mario & Luigi: Dream Team, the parasol makes a cameo in the credits.

In Mario Golf: World Tour, Peach wields her parasol in her victory animation whenever she gets a Birdie or an Eagle. It is implied to be magical, as after waving her parasol around for a bit, she then swings it and has her miniskirt change into her trademark dress.

In Mario + Rabbids Kingdom Battle, after the Icicle Golem freezes Mario's team, Peach uses the parasol to glide through the air to save them.

In Luigi's Mansion 3, Peach's Parasol appears as a damaged object in Room 501.