“AXEM RED: We fight for evil!
AXEM BLACK: We live for disorder!
AXEM GREEN: We like what we do!
AXEM PINK: We struggle for chaos!
AXEM YELLOW: We are...
...the AXEM RANGERS!!”
—Axem Rangers, Super Mario RPG: Legend of the Seven Stars

The Axem Rangers are a team of teenage[1] members of the Smithy Gang and appear in Super Mario RPG: Legend of the Seven Stars. There are five members, each with their own distinct traits and abilities. Each member has a similar trait to any one member of Mario's group: Black has high speed and fights mainly with non-elemental special attacks like Geno, Green specializes in elemental magic but lacks physical strength like Mallow, Pink is female and uses both healing and status-affecting magic while having the lowest attack and HP like Peach, Yellow is the bulkiest member while boasting the highest physical attack and defense like Bowser, and Red is the leader while being a balanced fighter like Mario. However, all five of them wield a small axe in combat. Additionally, the Axem Rangers have their own battleship, aptly named the Blade. Axem Red is the leader of the group. The Axem Rangers are a parody of the Super Sentai series in Japan, which is the basis for the Power Rangers series in the United States. 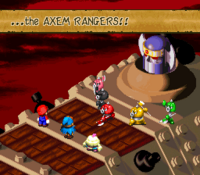 The Axem Rangers prepare for battle