Artwork of the Star Egg 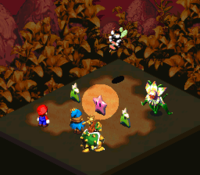 The Star Egg is a reusable battle item won from Grate Guy after Mario wins "Look the other way" 100 times in Grate Guy's Casino during Super Mario RPG: Legend of the Seven Stars. The Star Egg does 100 damage to all enemies when used in battle, attacking them with the inexplicable dancing of a Starslap and two Zeostars. A spotlight appears, the star dances a bit, and then a bird flies by; when the bird leaves, enemies are dealt damage. If the user has the "Attack Up" effect such as from Geno Boost or the Quartz Charm, the damage output is raised to 150. Unlike most battle items, the Star Egg is not consumed after use, but can be reused an unlimited amount of times.