“Mallow, you ARE indeed, a TRUE PRINCE!!”
—Garro, Super Mario RPG: Legend of the Seven Stars

Garro is a master sculptor who owns a studio in Nimbus Land. During the events of Super Mario RPG: Legend of the Seven Stars, Garro plays a pivotal role in the fall of Valentina and the restoration of the royal family to the throne of Nimbus Land.

When Mario and Mallow first enter his studio, they notice a golden statue that resembles Mallow. However, Garro reveals the sculpture depicts a young King Nimbus. As a result, Mallow realizes he is the true heir to the throne, and Dodo is an impostor. Garro agrees and decides to help Mario infiltrate the castle by layering him in gold, disguising him as one of his statues. The sculptor takes Mario to the castle, alongside a statue of Valentina. When one of the Birdies guarding the castle notices Mario, Garro claims that the statue is of Valentina's nephew, Mariotta, and the guards let him pass.

Upon entering the castle, Garro runs into Valentina, who scoffs at the awkward looking statue. However, Garro argues that the sculpture, which he names A Plumber's Lament, symbolizes the struggle of the working class and is a very powerful piece of art. Valentina quickly changes her previous evaluation, praising Garro for the statue. With Mario in the castle, Garro returns to his studio.

At the game's ending sequence, Garro is shown at the very back of the crowd celebrating Mallow's return; unlike the other crowd members, Garro leaves before the scene fades away. 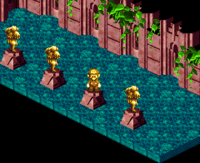 Some of Garro's works, including a gold-layered Mario.