Look the other way 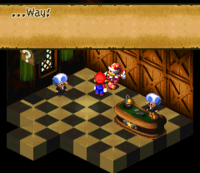 Mario playing "Look the other way"

“Business is so slow... Hey Mario, wanna play "Look the other way" with me?”
—Grate Guy, Super Mario RPG: Legend of the Seven Stars

"Look the other way" is a game invented by and played with Grate Guy in Grate Guy's Casino in Super Mario RPG: Legend of the Seven Stars. The game is free when Mario plays it. To play it, Mario must guess which way Grate Guy will look, thus looking the other way. Essentially, the game has 50/50 odds. If Mario wins, he is usually rewarded with undesirable prizes such as a Rotten Mush or a Wilt Shroom and a Moldy Mush (although he occasionally receives rare items such as Rock Candies, Red Essences, Royal Syrups, or Kerokero Colas). However, if Mario wins 100 times, he is rewarded with the Star Egg.