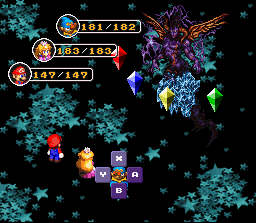 Mario, Toadstool, and Geno battling the Water Crystal as well as the other crystals and Culex

The Water Crystal is an enemy encountered in battle alongside the optional boss Culex in Super Mario RPG: Legend of the Seven Stars. Like Culex and the other crystals, it is from the dimension of Vanda and met in a portal leading to that world found in Monstro Town.

The Water Crystal is the second weakest crystal. While wielding decent Defense, its Magic Attack and Magic Defense are still lower than that of the Fire Crystal.

Its only weakness are Fire-based attacks.