Sleep is a status ailment in the Mario role-playing games and in the Super Smash Bros. series.

In Super Mario RPG: Legend of the Seven Stars, Sleep is one of the more common status ailments that the player can have. A physical attack will wake a character from Sleep, but a magical attack will not. While sleeping, a character is completely immobile and helpless. Additionally, Princess Toadstool is able to afflict this condition on enemies. The Wake Up Pin and some other accessories will prevent this condition.

Attacks that cause Sleep[edit]

When a character is asleep, they cannot move for a few turns. Unlike in Super Mario RPG: Legend of the Seven Stars, the character cannot be woken up until the effect wears off. Mario can inflict Sleep on enemies by using the Sleepy Sheep item, Mamar's Lullaby, or equipping the Sleepy Stomp badge. Much like with dizziness, certain enemies are affected greater than others. The Clubba, often found sleeping, will be affected for four turns of the battle (alongside White Clubbas, all plant-type enemies and Kent C. Koopa), where most other enemies will be down for three. Only Crazee Dayzees and Amazy Dayzees can inflict sleep on Mario; their song attacks can put him to sleep for three turns, but have a low chance of doing so (20% for Crazee Dayzees, 15% for Amazy Dayzees). Enemies hit with a successful sleep attack have a blue "splash" effect accompanied by low-pitched lullaby tones.

In this game, when sleeping characters are attacked, there is a chance that they will wake. This is indicated by a small exclamation point over the character when they are attacked. The sleep icon is a Sleepy Sheep, and a number by the Sleepy Sheep indicates how long the character is asleep. If the player is inflicted with the sleep effect, they can still use action commands such as Guard and Superguard. The timing windows for these actions will be reduced while sleep is in effect.

In Super Paper Mario, if the character is attacked by a Cherbil, a Crazee Dayzee, or an Amazy Dayzee, they will fall asleep and must be awakened by shaking the Wii Remote until the on-screen meter is filled up, unless the player gets attacked by an enemy. Also, the player can make enemies fall asleep by using a Sleepy Sheep. In the Underchomp battle, the player can use Piccolo to temporarily make the Underchomp fall asleep (this is based on Cerberus' weakness of falling asleep when music is played in Greek mythology). Mario and co. will also sleep after a prolonged period of inactivity - Tippi will perch herself atop the head of the character currently onscreen, and any character traveling with the heroes (such as Squirps or Luvbi) fall asleep as well.

Inflicted by a Baahammer, the Sleep status ailment acts like the Mushroom status ailment from Super Mario RPG: Legend of the Seven Stars: unable to attack, though slightly heals every turn. The sleep status also can be caused by using the Pillow, Bed, and Luxurious Bed Things. Mario can also become asleep from the Things with sleep properties unless the player mashes

While the status ailment does not exist in the traditional sense, Snoozorbs in Mario & Luigi: Partners in Time start battles asleep, not acting until the player wakes them with an attack. In Mario & Luigi: Dream Team, the Sleep condition is unique to the final battle against Antasma. Each of his attacks have a chance to put Mario to sleep, which triggers a unique sequence where Antasma attacks him with nightmares. When the nightmare is successfully escaped, the Sleep condition ends. 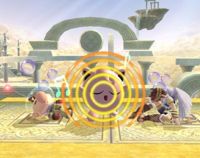 Jigglypuff putting other fighters to sleep with her Sing move in Super Smash Bros. Brawl.

In Super Smash Bros., characters with lower damage percentages sleep for longer, while in Super Smash Bros. Melee onward characters at higher percents sleep longer. In addition, characters in the air cannot be put to sleep. Attacking a sleeping opponent automatically wakes them up. With the exception of Sing, which does not affect airborne opponents, characters struck with the ailment in the air will fall to the ground helplessly until they land, where they enact the full sleeping animation.

The sleep status effect appears in the Donkey Kong Adventure DLC of Mario + Rabbids Kingdom Battle, where Rabbid Cranky can use his Long Story technique to put nearby enemies to sleep for one turn. If enemies are attacked while they are asleep, they will wake up instantly.

Sleep, referred to as Stasis, returns in Mario + Rabbids Sparks of Hope, this time triggered by Rabbid Rosalina's Ennui technique and functions the same way as in Mario + Rabbids Kingdom Battle. When an enemy is under the effects of Stasis, their body turns completely dark blue and has a padlock around them. Rabbid Rosalina can also unlock Ennui Dash via the skill tree which causes her dash attack to inflict enemies with Stasis.