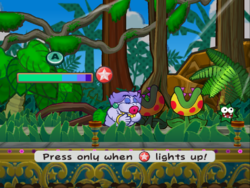 Flurrie using this move on a Putrid Piranha.

Lip Lock is a move Flurrie uses during Paper Mario: The Thousand-Year Door. It is obtained when the player levels up Flurrie to Super Rank. Similar to Fuzzies' attack, Flurrie goes to the enemy and kisses the enemy, draining the enemy's HP while replenishing her own. The player must hold down the

button when a red light lights up. This move costs 3 FP to use. Flurrie recovers HP equals to the attack power, regardless of whether the enemy has enough HP or not. This move does not damage certain spiky enemies (such as Spinies, Pokeys, and Bristles), however, it is not a jump-based move like Body Slam, and therefore top-spiky enemies (such as Koopatrols, Craws, and their dark variants) can still be attacked.