“Congratulations on your victory, Your Viciousness! That's why you're the king!”
—Kammy Koopa, Paper Mario

Kammy Koopa is a female Magikoopa and high-ranking member of the Koopa Troop and apparently Bowser's right-hand woman, being described as the "brains behind Bowser". She appears in Paper Mario as the secondary antagonist, and in Paper Mario: The Thousand-Year Door as a minor villain.

“You little whippersnapper... You're too young to fight me.”
—Kammy Koopa, Paper Mario 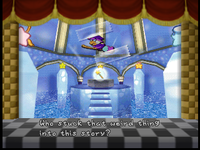 Kammy Koopa in the opening scene of Paper Mario

Kammy Koopa about to destroy the gate that Goompapa was fixing

Kammy Koopa first appeared in Paper Mario as the secondary antagonist. During the game's introduction video, which revealed she attacked Star Haven alongside Bowser and helped him steal the Star Rod and entrap the seven Star Spirits. Kammy later appeared alongside Bowser when he hijacked Peach's Castle and invaded, and stood on the sidelines as Bowser pummeled Mario in battle with the use of the Star Rod. When Mario was defeated by Bowser and blasted out a nearby window, Kammy congratulated him and had two Koopatrol guards capture Princess Peach.

When Kammy discovered that Mario had survived his battle with Bowser and the fall from the airborne Princess Peach's Castle and was now in Goomba Village, she tried to impede his progress. Summoning a yellow block, Kammy Koopa dropped it on the gate leading out of Goomba Village, thinking Mario would be unable to pass it and reach the nearby Toad Town. Kammy Koopa's assumption proved wrong, as Mario managed to smash this yellow block using a Hammer and also defeated the Goomba King. Seeing Mario do this, Kammy left the scene to inform Bowser of Mario's progress.

Kammy Koopa also appears in the various Princess Peach intermissions of Paper Mario, usually to alert Bowser of Mario's progress and other related information. After Mario defeated Tubba Blubba, Kammy informed Bowser of this and reassured him that with the Star Rod, he was unstoppable. Princess Peach happened to intrude on this conversation between Bowser and Kammy, and, instead of being taken back to her room right away, was asked by Bowser a series of questions relating to what Mario feared. After Princess Peach answered these questions, the answers of which varied between monsters and helpful items, Bowser had Kammy Koopa, who doubted that Princess Peach honestly answered Bowser's questions, venture to the Shy Guy's Toy Box and use her magic to summon what Princess Peach said Mario feared to guard several treasures the Shy Guys had stolen.

Later, after Princess Peach managed to blend into Bowser's forces, using a Clubba disguise conjured by her Sneaky Parasol, she (Peach) managed to almost reach the top of her castle, where Kammy was apparently working on some top secret project. Exiting a nearby tower, Kammy Koopa exclaimed that her project was complete and began to leave, only to stop and congratulate the disguised Princess Peach on doing a good guarding job. As she was praising Princess Peach, Kammy Koopa, realizing that the Clubba she was talking to smelled too pleasant, used her magic to destroy Princess Peach's disguise; Kammy Koopa then had two nearby Koopatrol guards take Princess Peach back to her room. When the Crystal King was defeated and Kalmar was rescued, Kammy informed Bowser of this, and had all of Bowser's guards get ready for Mario's impending arrival.

When Mario reached the top of Princess Peach's Castle and prepared to fight Bowser, Kammy enhanced the power of her boss to extreme levels using her aforementioned secret project, a flying arena. As Bowser battled Mario, Twink appeared and, planning to free Princess Peach, battled Kammy Koopa. At first, Kammy outmatched Twink completely, but as their battle waged on, Twink grew stronger due to the wishes of Princess Peach. Her only attack during this fight is to throw yellow blocks at Twink and Peach. Eventually, Kammy Koopa found herself unable to harm Twink and was eventually knocked unconscious by him. When Bowser was defeated by Mario, Kammy's arena started to malfunction. When Bowser was asking her what was going on, Kammy reluctantly informed Bowser that, because of the intensity of his fight with Mario, the platform's energy was overloading, which also caused a chain reaction leading back to the castle, meaning both were about to explode. Before Bowser could give the evacuation order, Kammy and Bowser were caught in one of the explosions, flinging them to parts unknown and destroying Bowser's Castle in the process.

Kammy Koopa evidently survived this explosion, as she can be seen in the ending parade of Paper Mario, engaged in a magical duel with Jr. Troopa. After a wayward magical attack from the duel hits Bowser, both Kammy Koopa and Jr. Troopa are burnt by Bowser's fire breath.

“Why, even at my age, I was shaking what my momma gave me!”
—Kammy Koopa, Paper Mario: The Thousand-Year Door

In Paper Mario: The Thousand-Year Door, Kammy Koopa returns as a minor villain, reprising her role as Bowser's lieutenant. She is the one who informs Bowser of the Crystal Stars and Princess Peach's kidnapping by Sir Grodus (though she is not aware Grodus is the culprit). Kammy Koopa appears throughout the Bowser intermissions of the game, and was usually used for comic relief, such as getting in a fight with the Puni elder or going to Glitzville and coming back decorated in souvenirs.

In Palace of Shadow, it was the interruption of both Bowser and Kammy Koopa falling through the ceiling that stopped Sir Grodus from attacking Mario and murdering Princess Peach. After landing on Grodus, Bowser and Kammy engaged Mario and his partners in battle and were defeated and fell on the floor of the Palace of Shadow unconscious. If the player leaves and reenters the room, both she and Bowser will disappear. They never appear again for the rest of the game.

Outside of battle, Goombella can use Tattle on Kammy Koopa only after Mario defeats her and Bowser in Palace of Shadow.

Kammy Koopa appears in Super Smash Bros. Brawl as a sticker that raises the attack power of "direct" attacks by eight. The sticker is obtained randomly.

Kammy Koopa makes a cameo appearance in Super Smash Bros. Ultimate as a primary, attack-type spirit. When equipped, it increases the power of magic attacks.

Kammy Koopa makes a brief appearance in a volume of Super Mario-kun.

Although Bowser outright disrespects her quite often, usually directly in her presence, Kammy appears totally devoted to him and is often shown in his company. In Goombella's tattle in Paper Mario: The Thousand-Year Door, she wonders whether it is harder for Kammy to put up with Bowser, or vice versa. The old Magikoopa is also somewhat vain, believing herself to be beautiful beyond compare, saying her name is beautiful and often describing herself as such. Kammy can also be unintentionally comical at times and she occasionally shows signs of senility.

Kammy Koopa is one of the higher ranked Magikoopas. Being so, she wears distinctive clothes to separate her from the others. She is seen with dark purple robes and a dark purple hat. Her hat unlike most Magikoopas, bends backwards, when most Magikoopas hats stick straight up unless mounted on a broom. She is seen with white hair down the side of her face and small oval-shaped glasses. She is also noticeably shorter than most Magikoopas and has a hunched back. Being shorter, her staff is also shorter than most Magikoopas. She is also often seen mounted on her broom. The broom is much bigger than her with bamboo-like texture to the wood. The end of the broom has half white and purple cloud-like texture. This end piece puffs as she flies. Her physical appearance is quite similar to Kamella.

In Paper Mario, Kammy Koopa showed a variety of powers, doing such feats as summoning yellow blocks and living creatures, using magical lightning which could cancel the effects of the Sneaky Parasol and in the game ending parade, the ability to teleport, and the usual Magikoopa ability to shoot a magical blast. Kammy Koopa also showed some expertise at mechanics, apparently being the one who built Bowser's Power Platform. Despite this range of abilities, Kammy was exceptionally weak in battle, having at the most only ten HP.

In Paper Mario: The Thousand-Year Door, Kammy Koopa appeared to only possess the generic Magikoopa abilities, such as bestowing different powers to herself and Bowser and recovering health.