“WHAAAAAAAAAAAAAAAAT?!? You destroyed my precious younger sister?!? I wondered why she hadn't written recently... Quake in fear, mortals! For I am Gloomtail! I will avenge my sister by taking your lives...and then gnawing on your bones!”
—Gloomtail, Paper Mario: The Thousand-Year Door

Gloomtail is the middle sibling in the "tail" family in Paper Mario: The Thousand-Year Door. He is the older brother of Hooktail and the younger brother of Bonetail. Upon hearing Mario's partners say they defeated his sister Hooktail, Gloomtail vows to destroy Mario and company and avenge his sister. He lives in the Palace of Shadow and guards the Star Key, which is needed to unlock the pedestals in the Riddle Tower. Mario and company had to defeat Gloomtail to get the Star Key. 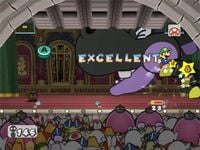 Mario and his partners battle Gloomtail.

Gloomtail is stronger than his sister. He attacks by breathing poison on Mario and his partner (taking at least ten turns to wear off), and stomping or chomping the character in front. His Earthquake move can be dangerous, but it doesn't work on Vivian and Flurrie. He can also charge up for his signature and strongest attack: his Megabreath move, which does up to 16 damage. 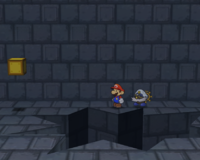