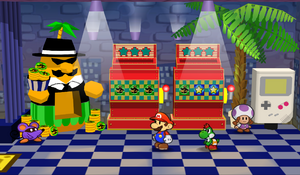 Mario and his partner in front of the two slot machines and Don Pianta-resembling change machine.

The Pianta Parlor is a casino in Rogueport in the game Paper Mario: The Thousand-Year Door. Mario can come here to play minigames for pianta tokens, which can be exchanged for items and badges. There are slot machines as well as four minigames to play, and each of the minigames use the four different curses Mario receives from the Black Chest Demons. The slot machines are initially there, but Mario must complete certain troubles to receive cards to play the other games. Beginning in Chapter 6, Don Pianta will hang out at the Parlor.

The Special Card is needed to play this game. In the Plane Game, Mario must fly down from a high platform and try to get as far as possible. The farther Mario goes, the more pianta tokens he will win. There are also several spots to multiply the amount won, but there are also spots that subtract the number of pianta tokens Mario will receive. Some pianta tokens float in random spots in the air.

The player must have the Silver Card to play this game. In the Paper Game, Mario and a massive crowd of different species must race towards a finish line. Mario is not timed, but he still needs to get in first to the finish line. Large fans blow against Mario and the crowd, and if Mario is not careful the wind can push him into a pit. This causes him to "retire" and forfeit any pianta tokens he might have earned, but if he turns paper-thin, the air will just pass by. However, moving in Paper Mode makes him run slower. Luigi, Koopie Koo, and Wonky have a cameo appearance in the race, and there is a chance for all opponents to be pink Bob-ombs. If the player comes in first place, they will get 20 tokens (earning ten tokens as it costs ten tokens to play).

The player must have the Gold Card to play this game. In the Tube Game, Mario is in tube form and has to move as fast as possible around barriers and obstacles on a track with no rails to get to the finish. Turning is a problem and since there are no rails, it is easy to fall off and lose precious time. Pianta tokens are scattered through this stage. A technical bonus is given if Mario does not fall off the stage.

The player needs a Platinum Card to play this game. In the Boat Game, Mario is in boat mode and he must sail between floating barrels and whirlpools to make it to the finish. There are also pianta tokens scattered through the stage. He is timed and this game can be considered difficult. A technical bonus is given if Mario does not hit any whirlpools.

Mario can use pianta tokens converted from the Don Pianta machines or from winning the minigames to trade for prizes. Getting membership cards unlocks new prizes.