“What? You want to make a Heartful Cake? And who asked you to? Merlee?”
—Toce T., Paper Mario: The Thousand-Year Door 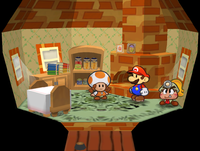 Toce T. is a Toad who lives in the serene village of Petalburg during the events of Paper Mario: The Thousand-Year Door. Her name is a play on the word "Toasty". According to Goombella, she is huffy about something; however, she still keeps a straight face. Although she plays little role in Paper Mario: The Thousand-Year Door itself, she plays a major part in Merlee's trouble, in which Merlee forgets the recipe for Heartful Cake and sends Mario to Toce T., who she is sure knows its recipe. Toce T. does manage to reveal to Mario that Heartful Cake is made by having Zess T. mix a Cake Mix and a Ruin Powder together (a recipe that can later help Mario and friends on their adventure) and Mario eventually completes the trouble, although Merlee later requests that he retrieve her a Cake Mix, an ingredient she lacks. This trouble seems to show that Toce T. is acquainted with Merlee, as the latter wonders who the Toad was making the Heartful Cake for at the time and tells Mario to tell her she said "hi".