Gus is a Craw and a mini-boss encountered during the events of Paper Mario: The Thousand-Year Door. He is a loyal member of the Robbo Thieves of eastern Rogueport, along with his brother Garf and their associate Goose. Gus can be found outside of Professor Frankly's office, guarding the passageway to the farthest eastern area of Rogueport. Gus is the only member of the Robbo Thieves that the player can fight and the only Craw that can be fought. He can be battled at any time during the game. Goombella describes him as a "workaholic", wondering if Gus might in fact perform his guard duty every day of the year.

Gus is first seen is during a cinema in the game's prologue. As Toadsworth informs Mario of Princess Peach's disappearance, the player sees an additional cinema in the background pertaining to the Robbos and the Piantas. As Gus and Garf walk through Rogueport Plaza, Tony and Vinny, two members of the Pianta syndicate, assault Gus and Garf, knocking Garf to the ground. As the two Piantas take off towards West Rogueport, Gus and Garf flee back to eastern Rogueport, cursing out the Piantas on their way.

Gus is not seen again until Mario and his partner see him guarding the entrance to the far eastern area of Rogueport. Gus then inquires Mario and his partner, asking if they would like to pass, giving them the option to say "No", "I'll pay", or "I can take you!". If Mario says "No", then Gus doesn't allow him to pass; if Mario says, "I'll pay", Gus allows him to go through the entrance for a toll of ten coins. Mario is required to pay Gus each time he passes through the area unless he says "I can take you!" If Gus is defeated in the ensuing battle, Mario is no longer required to pay the toll, as Gus returns to the Robbos' hideout (behind Admiral Bobbery's house), where he and Garf guard Ishnail for the remainder of the game. Gus develops a grudge against Mario for beating him up over 10 coins, thinking Mario was an uncontrollably violent person, although he gives Mario respect after he defeats the Shadow Queen. 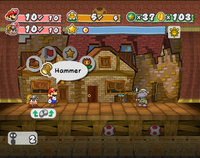 The battle against Gus.

In battle, Gus attacks using his sharp spear. Gus either charges towards Mario or his partner, ramming into them with his spear, or he hurdles a spear at the player, inflicting the same amount of damage. Characters cannot jump on Gus due to his spear unless they get the Spike Shield badge later in the game. If Mario decides to fight Gus before going to the Thousand-Year Door for the first time, there will be no audience. 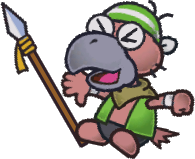 If Mario reaches five HP while fighting Gus, Gus advises Mario to flee, rather than stay and continue to fight. If Mario flees the battle beforehand, the battle ends, but Mario loses no coins.