Not to be confused with Bingo; a inhabit of Waki-Waki with the same name. 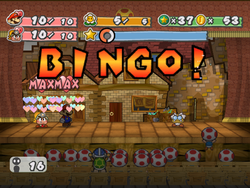 The Bingo! demonstrated in the tutorial battle by Professor Frankly

A Bingo! is an in-battle event that can occur in Paper Mario: The Thousand-Year Door after successful completion of multiple Action Commands, often (but not always) providing the player with a strong positive boost depending on their luck and skill.

Each time the player successfully executes an Action Command, a random icon will appear in the upper-right corner of the screen: a Mushroom, Flower, Star, Shine Sprite, or Poison Mushroom. The next time an Action Command is executed (which does not have to be consecutive), a second random icon appears. If the two icons do not match, they disappear and the process restarts. If the two icons do match, they remain there until the player completes a third Action Command. After the third successful move finishes, the two symbols will appear in the middle of the screen with a third symbol rapidly changing, scrolling vertically like a slot machine in a predictable order. The player must stop the third icon with

. If the third symbol doesn't match the other two, nothing happens and the entire process restarts. If the three icons match, then an event occurs based on which icon has been lined up:

Earning a Bingo! also affects the audience and Mario's ability to gain Star Power from them:[1]

Moves used by Star Power do not contribute icons to the Bingo! set, even if their Action Commands are successful. A Bingo! cannot be built across multiple battles; any icons earned are lost when the battle ends. The Bingo! event does not occur if the third successful Action Command ends the battle.

There are two events in specific battles where Mario automatically earns Shine Sprite icons for successful Action Commands and is guaranteed a successful Bingo!, even if the player attempts to fail matching the third icon.