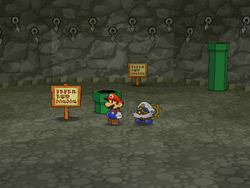 Mario and Bobbery standing near the warp pipe leading to the Pit.

The pipe that leads down to the Pit of 100 Trials is found near the entrance to the Palace of Shadow. According to Grifty, the Shadow Queen created this dungeon and filled it with powerful monsters. She threw people she did not like into the pit and left them to the mercy of the monsters within it. Sometime after her defeat, the pit was closed off from the public.

The early levels are relatively simple to clear, being inhabited by enemies found in early chapters. As the player progresses downward, however, the enemies become stronger, featuring more powerful enemies from later chapters and enemies unique to the Pit of 100 Trials itself. Upon reaching Level 100, the player faces Bonetail, a zombified dragon which acts as a much stronger version of Hooktail and Gloomtail.

Every tenth floor, with the exception of the hundredth, contains a brief rest from battles, a treasure chest, and a pipe which takes the player back to entrance of the pit. Occasionally, Charlieton or a Mover can be found; Charlieton offers to sell the player items for abnormally high prices, while Movers accept payment for taking them back up to the surface or skipping him down two or five levels. Rest floors can, however, be skipped this way.

Two troubles at the Trouble Center require the player to enter the Pit; Pine T. Jr.'s father needs to be rescued on Level 18, and another trouble necessitates the destruction of a wall on Level 50 using Admiral Bobbery's field ability.

Enemies in the Pit of 100 Trials[edit]

Each floor has one enemy in the overworld, but when Mario enters battle, there are usually at least 2 enemies in the battle, with the deeper floors having more. There is no way to get down to the next floor without winning the battle, as the defeat of the enemies causes a Warp Pipe to appear out of the ground, leading to the next room of the pit. However, if a Bandit steals from the player and runs away, the enemy will not be considered defeated and the fight will have to be restarted with the Bandit holding the stolen object. Since Bandits run away on their turn when holding a stolen object, it can be quite difficult to proceed to the next floor and if certain measures are not taken can potentially leave the player in an unwinnable state.

Enemy Combos for the Pit of 100 Trials[edit]

Prizes in the Pit of 100 Trials[edit]