Not to be confused with Twilight City or DS Twilight House.

Two residents that have turned into pigs

Twilight Town is a creepy-themed, perpetually twilit town in Paper Mario: The Thousand-Year Door, and is mainly inhabited by Twilighters. Crows inhabit Twilight Town as well, and players can listen to their conversations when Mario uses Vivian's field Veil ability. To enter Twilight Town through the pipe in Rogueport Sewers, Mario is required to have his name to be written on his clothes, otherwise the pipe will reject him.

While Mario and his friends are searching for the fourth Crystal Star, the Twilighters are turned into pigs by a distant bell in Creepy Steeple. After heading there, Mario finds a Duplighost named Doopliss who had been responsible for the chaos caused in Twilight Town. Despite putting up a good fight, and reverting all of the Twilighters to normal in the process, Doopliss managed to steal Mario's identity in an attempt to cause more havoc.

At around this time, Vivian had been looking for the Superbombomb after her sister Beldam framed her for "dropping" it. In his cursed state, Mario helped her find it, and as thanks Vivian decided to help him retrieve his identity. After listening in to a conversation of a parrot who Doopliss had locked up, the duo was able to correctly guess Doopliss's name, then battle him again back at Creepy Steeple, allowing Mario to win back his identity. The Twilighters, shocked over the fact that Doopliss had disguised himself as Mario, praised Mario for restoring peace to Twilight Town.

Later on, Lord Crump is seen looking for the Superbombomb when he gets stopped by Bowser and Kammy Koopa. After a brief confrontation between the X-Nauts and the Koopa Troop, Bowser inadvertently ignites the Superbombomb, sending both groups flying.

Some items are on sale in the Twilight Shop which is located in the east area. 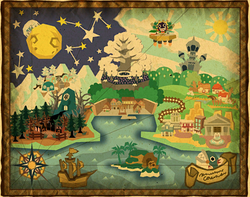