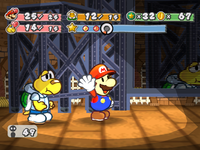 Appeal is a tactic used in Paper Mario: The Thousand-Year Door by any character. The character looks to the audience, and performs a signature pose. In response, the crowd gives adoration and fills the Star Power bar a little. Sometimes, the demands of winning a match in the Glitz Pit involve the player having to appeal a certain number of times in the battle.

Also, Admiral Bobbery can get rid of mist with his appeal.