“Bwa ha ha! I'm no ordinary Goomba... I am Goomboss, the great Goomba, the grand pooh-bah Goomba. That Mario always stomps on us. But now the tables have turned! I locked him up in a room. I bet he's crying like a baby. I have no business with you, so scram! There's no way a prehistoric wimp like you could beat my stupendous stomps!”
—Goomboss, Super Mario 64 DS

Goomboss, originally known as the Goomba King or King Goomba, is one of the first bosses that Mario and Goombario encounter in Paper Mario. He later reappears as a boss in Super Mario 64 DS and Mario Kart DS.

He is one of the few original Paper Mario series characters to reappear in other Mario games, along with Whacka, Tweesters, Koopatrols, and the Star Spirits. His name is a portmanteau of "Goomba" and "boss".

Fight with the Goomba King and the Red & Blue Goomba Bros.

In Paper Mario, he was originally an ordinary Goomba, but Bowser used the Star Rod to make him a king (which also greatly increased his size) under the conditions that he would assist Bowser later on. He is first seen when the Goomba Bros. come to his fort wailing about their defeat to Mario. He lets them in his fort, and when Mario comes by, he has a short conversation with him and then engages him in battle along with his minions.

In battle, he is accompanied by the Red & Blue Goomba Bros. Mario will find him by his fortress. The easiest way of defeating him is to hit the Goomnut Tree at the start of the battle to make one giant Goomnut fall on him and the Red & Blue Goomba Bros., doing three damage and instantly knocking the weakened Goombas out. When the Goomba King is defeated, he surrenders and retreats to his fort while pleading that Mario will not press a nearby switch. When Mario presses the switch, the fort reveals to be a bridge used to get to Toad Town, and he and his minions are sent flying and fall into the abyss, defeated.

While Mario battles the Goomba King and the Red & Blue Goomba Bros., Kammy Koopa is secretly observing the battle. She reports back to Bowser, who is furious at the Goomba King's defeat and also yells "I only used the Star Rod to make him a king because he begged me to...".

In the ending parade of Paper Mario, the Red & Blue Goomba Bros. are trying to get the Goomba King out of a tree. He then falls out, and dizzily wobbles off the screen, followed by the Goomba Bros.

According to Luigi, the Chestnut King is the villain who kidnaps Princess Eclair from the Waffle Kingdom and brings her to Hatesong Tower. Luigi travels to the tower by using the Marvelous Compass. Once there, Luigi challenges the Chestnut King to a battle. The king eventually loses to Luigi and his hammer. However, before Luigi can deliver the final blow, Princess Eclair appears and stops him. It turns out that the Chestnut King and the princess are actually lovers, much to Luigi's dismay. The King was transformed into a monster through the magic of Minister Crepe of the Waffle Kingdom. Eventually, Luigi defeats Crepe, presumably restoring the Chestnut King to his former self. Luigi never directly admits that he was wrong in believing that the Chestnut King was the Princess's captor (although he does admit after a long pause that, though he had won, he ended up beating a shadowy figure shortly afterward), and Mario can only read about it in the Super Luigi book series. 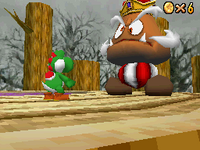 The Goomba King reappears as a boss in Super Mario 64 DS, now called Goomboss. He is fought within the battle arena in Goomboss Battle, which can be reached after eight Power Stars are collected. In order to defeat him as Yoshi, the player must eat Goombas and spit them back at him in the form of an egg to win back Mario's key in order to unlock him as a playable character in the game. However, Goomboss starts getting bigger, faster, redder, and angrier after every hit and also gains more Goomba followers. He needs to be hit three times in order to admit defeat. When returning to fight him once again as Mario, Luigi, or Wario, the player can kick Goomboss in his face or back and obtain a Super Mushroom. Using it and attacking him while under its influence is not required to defeat him; the player can just punch the Goombas into him to damage him. After he is defeated, Yoshi gets the Mario Key, which is used to unlock Mario. This appearance also proves that Goomboss knows Luigi, but he does not know Wario. Also, when Goomboss is hit, every normal Goomba runs up to him, as if worried. He sometimes even tramples his own Goombas. When the player plays as Yoshi, the Goombas spawn behind Goomboss, while for the other player characters, the Goombas spawn in front of him at first and can spawn in front of him and behind him later in the fight. 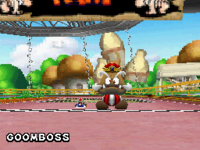 Goomboss reappears in the third level of the Mission Mode in Mario Kart DS, where he appears as a boss, where the player, playing as Toad must complete three laps of the GCN Baby Park course before Goomboss does. After each lap, Goomboss becomes bigger and angrier, but he has to stop for a few seconds to grow, giving the player a chance to pass him. Another chance to pass him is when he stops to throw one Goomba on the first lap; one or three Goombas on the second lap; or one, three, or five Goombas on the third lap. If Toad hits a Goomba, the player will lose one of their three balloons, and if the player loses all three balloons, they will fail the mission, although the player will not lose a balloon if Toad hits Goomboss. Occasionally, Goomboss will throw a Mushroom instead of a Goomba, allowing the player to get a boost of speed. Additionally, on the third lap, Goomboss will cheat and hop over the center divider, improving his chances of winning. If the player is in front of Goomboss, he will not stop to toss Goombas, but will run faster so he can catch up.