This article is about a minigame in Super Mario 64 DS. For other uses, see Boom Box. 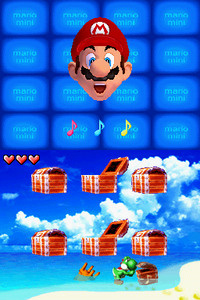 Boom Box is one of Yoshi's minigames in Super Mario 64 DS, though Yoshi is only seen pushing a treasure chest in the background. The minigame's name is a pun on "boombox."

The minigame involves the player tapping a treasure chest on the Touch Screen to open it. When opened, the chest makes a sound, astonishing the Mario head on the top screen. For every chest that makes a certain sound, there is another chest that makes the same sound. The player must match all the sounds with each other. If the player makes a mistake, the Mario head frowns, while if the player succeeds, the Mario head beams at them. When the player clears a level, Mario's face is astonished, then bursts out laughing. As the player progresses, more chests appear. On most levels, there are six treasure chests; however, some levels have eight treasure chests. On some levels, the sounds sound exactly the same and require the player to pay attention to which speaker each sound comes out of. If the player loses three times on a level, the minigame ends while Mario's face yells and looks dazed.

Each time you open a treasure chest, you'll hear a sound. Open 2 chests with the same sound. Win by matching all the pairs!