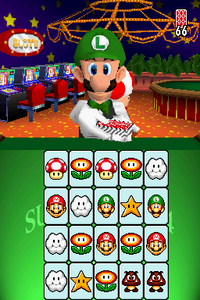 Pair-a-Gone and On is one of Luigi's minigames found in Super Mario 64 DS. It is a endless version of Pair-a-Gone.

The minigame is largely identical to Pair-a-Gone: The player must attempt to match two cards that are adjacent to each other either horizontally, vertically, or diagonally. Whenever the player manages to match a set of cards, Luigi deals out more to replace them. However, these cards never end and keep replenishing, hence the name. Once there are no more matches for the player to make, the minigame ends and the player's score is recorded.

*Appears after several cards are paired.

This game of Pair-a-Gone goes on forever! Test your skill and see how many cards you can clear. Go for the record!