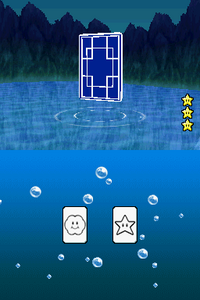 Psyche Out! is one of Wario's minigames in Super Mario 64 DS.

The music for this minigame is the Jolly Roger Bay/Dire, Dire Docks music, but it is slower and plays only one variation.

The player is shown the back of a card and is asked to use their "psychic" powers to guess which of two symbols is on the front of the card. It could be a Mushroom, Fire Flower, Super Star, Lakitu's Cloud, or Cape Feather. In reality, the card is not entirely opaque, and players can make out the symbol on the front. The player can keep playing until they guess incorrectly. After the player guesses correctly five times, the card becomes harder to see through, and the player has to choose from three symbols. After guessing correctly five more times, the player needs to choose from four symbols. Finally, from Level 16 onward, the player needs to choose from all five symbols.

Are you psychic? Can you guess what's on the card's other side? Maybe if you stare at it long enough, a vision will come to you.