The courtyard is mostly empty, aside from four signposts and the Star Fountain[1] in the very center. The middle, leftmost, and rightmost areas have white pavement (most of it appears gray due to being under a shadow). There is grass growing between the center area and the leftmost and rightmost area. Several small trees are planted in the grass. Four small trees are in the center area, each planted in small patches of dirt; two are against the wall behind the Star Fountain, and the other two are planted next to the door.

Mario in the courtyard in Super Mario 64

In Super Mario 64, if Mario has at least 12 Power Stars, a Big Boo appears in a narrow hallway with a door at the end that leads into the courtyard. If Mario approaches the Big Boo, it moves down the hall and passes through the door. There are nine Boos and a Big Boo with a small cage inside it in the courtyard, although if Mario has fewer than 12 Stars, there are no Boos. Mario must defeat the Big Boo to release the cage, which takes him to the fifth course, Big Boo's Haunt. 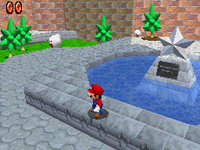 Mario in the courtyard in Super Mario 64 DS

Map of the courtyard

In Super Mario 64 DS, at least three Power Stars are needed for a Boo to appear in the hallway and eight Boos to appear in the courtyard, each containing a Red Coin; obtaining the Red Coins causes a hidden Power Star to appear behind the fountain. Once the Power Star is obtained, Yellow Coins replace the Red Coins. The Big Boo and three additional regular Boos appear when the player has at least 15 Power Stars, with the Big Boo replacing the regular Boo in the hallway. Any player character except Yoshi can defeat the Boos.

The remake has a few additional features within the courtyard. There are three Bricks on the right side, which Mario, Luigi, or Wario can break to enter Battle Fort. An alcove was added into the castle exterior, directly above the door. One of Luigi's rabbits is found in the alcove. One of Wario's rabbits is found around the fountain.

In Super Mario Odyssey, the courtyard is a hidden location in the Mushroom Kingdom. It can be accessed from a locked red door on a hill by the Goomba Woods. The door is guarded by a Toad, who allows Mario to enter the courtyard only if he is wearing the Mario 64 Cap and Mario 64 Suit. The courtyard retains its design from the original Super Mario 64.

The courtyard has the Mushroom Kingdom's 27th and 28th Power Stars, titled "Totally Classic!" and "Courtyard Chest Trap," respectively. The former Power Star can be obtained by throwing and spinning Cappy on the star statue. There are eight treasure chests around the courtyard, and Mario can obtain the latter Power Star by opening them in a certain order. If the chests are opened in the wrong order, they disappear and a group of Chinchos appears, which must be defeated for the chests to reappear. Four chests are located on the patches of dirt in the center area, replacing the trees, while the position of the eighth chest corresponds to the location of the Big Boo in Super Mario 64 and its remake.

Courtyard coverage on other NIWA wikis: