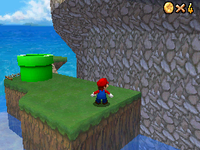 Mario near a Shrinker Pipe

Shrinker Pipes[1] are objects that appear in Super Mario 64 and its remake, exclusively in the level Tiny-Huge Island. Though they look visually similar to Warp Pipes and use the same sound effects, they do not transport the player anywhere. Instead, they change the user's size, making them either much larger or much smaller than their surroundings. However, a Shrinker Pipe changes to be the size of the player, and the player looks the same size on the screen, leading to the illusion of the island itself shrinking or growing. Using a Shrinker Pipe also resets certain events, such as the race with Koopa the Quick, allowing them to be reattempted without exiting the stage.

There are three Shrinker Pipes on Tiny-Huge Island. One is located near the level's start, on the same platform as the Small Piranhas or Piranha Flowers. A second is located at the base of the mountain, above the source of the iron balls. The third is located on the opposite corner of the island from the level's start, at the point where the race with Koopa the Quick ends.

Magic Doors from Super Mario Bros. 3 provide a similar function for the similar world in that game.