This article is about the item and object found in various Mario games. For the item in Mario's Time Machine, see Painting (item). 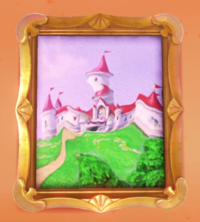 A warp painting from the Luncheon Kingdom to the Mushroom Kingdom, from Super Mario Odyssey

“Bowser has stolen the castle's Stars, and he's using their power to create his own world in the paintings and walls.”
—Toad, Super Mario 64

Paintings are objects that appear in several of the Mario games, serving various purposes. They first appear in Super Mario 64.

Paintings in Super Mario 64 are used to travel from the Mushroom Castle to the game's many levels, such as the Bob-omb Battlefield. Certain paintings are located in special themed rooms (for example, Jolly Roger Bay's painting is in what appears to be an aquarium). Most painting frames are yellow, but some of the paintings also have different colors, such as Wet-Dry World's being blue. Several paintings on the second floor are copies of ones on other floors and cannot be entered. The painting for Jolly Roger Bay is changed in Western localizations, with the original Japanese version depicting large bubbles and the Western versions depicting the sunken ship.

According to the Toad near the main doors at the front of the castle, the paintings were created by Bowser to create his own world using the castle's Power Stars to keep the Toads and Princess Peach captive.[1]

Paintings return in the remake, Super Mario 64 DS, where they serve the same purpose. All of the paintings have been retouched, with some also being redone due to some designs changing in the eight years between releases. Also, all releases of this game have the Jolly Roger Bay painting depicting bubbles.

Paintings return in Super Mario Odyssey. Also referred to as warp holes[2] in this game, they serve the same purpose of acting as gateways to certain kingdoms, but they are not the primary means of traveling to each kingdom. Instead, they are scattered across each location, often in hidden areas. When used, they send Mario into enclosed areas in each kingdom so he can collect Power Moons that are inaccessible through regular means. The paintings are typically not activated until the entrance location's story missions have been completed, though some, such as the one to the Sand Kingdom, are usable earlier than that, while the ones to the Seaside Kingdom, the Snow Kingdom, and Bowser's Kingdom are inaccessible until the game is completed.

Much larger paintings also appear in towers and other hidden areas outside Peach's Castle. They transport Mario to tougher versions of the battles against Knucklotec, Torkdrift, Mechawiggler, Mollusque-Lanceur, Cookatiel, and the Ruined Dragon. When these paintings are used, the level-selection jingle from Super Mario 64 plays before the rematches begin.

There is also a painting in the Wedding Hall in the Moon Kingdom, and it allows for Bowser to be fought again. Another painting can be unlocked in the Wedding Hall by collecting all 880 Power Moons in the game (not counting extra ones obtainable by shopping), which leads to a harder version of the Bowser fight.

In the Darker Side, during the final portion of the kingdom, Mario must jump into a painting of Bowser to capture him again, as he is required to complete this final section.

Mario trapped in a painting

Multiple paintings appear in Luigi's Mansion. Most are simple background objects that occasionally hold treasure and can be commented on by Luigi through the Game Boy Horror; some of these appear to depict living versions of the portrait ghosts, and the ones in the Parlor speak to Luigi after he blows out six candles early on. Some, however, are more important to the plot, namely, the ones of the defeated portrait ghosts, the quality of which depends on how many pearls Luigi collects. Another is the one Mario is trapped in, which serves as Luigi's primary goal. Before the battle with King Boo, the painting is replaced with one of Bowser, which sucks the two inside it. After Luigi defeats King Boo, the Mario painting reappears, and Luigi takes it back to E. Gadd's lab. Mario is then sent through the Ghost Portrificationizer in reverse to return him to normal. Unlike the static images of the portrait ghosts, Mario's picture is of him banging on the panel, trying to escape.

Mario gets trapped in a painting again in the game's sequel Luigi's Mansion: Dark Moon. Once again, several paintings are found throughout the game, many of which contain items and five Toads to rescue. In this game, however, obtaining the items necessitates the usage of the Dark-Light Device. Mario's Painting is alluded to throughout the game, but it is fully revealed in the Treacherous Mansion. After defeating King Boo, Luigi has to use the Dark-Light Device on Mario to get him out of the painting. 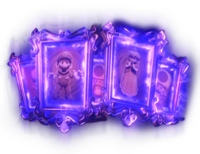 Mario's, Peach's, and the Toads' paintings

Paintings reappear in Luigi's Mansion 3. In this game, Mario, Princess Peach, three Toads, and Professor E. Gadd are trapped in paintings by King Boo. He also attempts to trap Luigi in a painting, though he escapes. Like in Luigi's Mansion: Dark Moon, the Dark-Light Device can be used to get the characters, as well as items such as coins, out of the paintings.

At the end of the game, King Boo ambushes Mario, Luigi, and Peach on the Rooftop of The Last Resort, attempting to trap them all in a single painting. After successfully trapping everyone except Luigi, he engages him in battle, with the painting holding the others hovering in the background. In his final phase, King Boo enlarges the painting to a colossal size, attempting to bring it down on the entire building to trap Luigi; he must defeat King Boo within four minutes to avoid being trapped. Afterwards, the painting shrinks back to its original size, allowing Luigi to free his friends and brother with the Dark-Light Device.

The Game Over screen shows Luigi trapped in his own painting, alongside his brother's and friends' paintings, with King Boo holding them up all around himself.

In Mario Kart Tour, painting-like portals appear on the Break Item Boxes bonus challenges set in DS Luigi's Mansion and RMX Ghost Valley 1, having a similar frame design to the warp paintings in Super Mario Odyssey and a rotating multicolored spiral image. They appear growing in front of drivers and stay floating in place, producing Item Boxes for the player to obtain, and they can vary drastically in size, with some being roughly the same size as a small driver and others being giant paintings capable of spawning big numbers of Item Boxes.

Two paintings make an appearance in Super Nintendo World inside Peach's Castle. They are modern versions of the paintings of the Bob-omb Battlefield and Tiny-Huge Island from Super Mario 64 with frames resembling the warp paintings in Super Mario Odyssey, which resemble their appearances in Super Mario 64 DS. If they are looked at from the side, they reveal an image of Bowser Jr. in his Junior Clown Car with the Golden Mushroom.