This ghost was able to possess multiple suits of armor at once. An impressive feat! I was slightly less impressed when he used those suits of armor to try to squish Luigi.

The Possessor inside the giant suit of armor.

The Tough Possessor possesses suits of armor seen within the room, notably those resembling the ones found in the Gloomy Manor's Guard Hall. When possessing the giant knight, he simply looks like a larger version of the suits of armor except that an orange glow emanates from the knight's helmet. However, during the battle, only the feet and sword of the knight are shown.

When not possessing the armor, the Tough Possessor is a thin, white, multiskined, ghost. This Possessor has five horns; two pairs of horns on either side of his head as well as a pointed horn protruding from the front of his head. 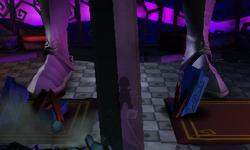 The giant suit of armor attempting to stab Luigi.

When possessing the giant suit of armor, the Tough Possessor can cause rubble to fall from the ceiling. Luigi can dodge this rubble by avoiding the shadows the rubble creates before falling to the ground. The main attack of the Possessor during this phase is trying to crush Luigi with his feet. The Possessor can stomp up to three times in a row and will use the foot that is closest to Luigi. The Possessor can try to stab Luigi by using a downward thrust and he can also drag the sword along the ground to catch Luigi off-guard.

Outside of the suits of armor, the Possessor will try to ram into Luigi. When performing the charge, the Possessor can emit three trails behind him that damages Luigi. After one charge, however, he will be stunned for a moment, but he recovers quickly.