“This nightmarish skyscraper full of ghostly challenges awaits you and your courageous friends! Can you battle your way to the top?”
—E. Gadd (In-game description), Luigi's Mansion: Dark Moon

The game puts four different-colored Luigis (as well as four other different-colored Gooigis in Luigi's Mansion 3) in one of the modes. The host player can set the amount of floors to five, ten, twenty-five, and endless, as well as the difficulty of the mode: Normal, Hard, and Expert. The endless floor option is available only for the chosen mode once the 25 floors of that game mode are cleared. If the amount of floors is set to endless, the difficulty is automatically set to endless and cannot be changed. The final room is always the roof, unless it is set on Endless. The ghost bosses in the ScareScraper have different amounts of HP than their original versions in the main game, and in Dark Moon, for every five floors cleared, non-boss ghosts gain 5 additional health.

The game ends when all Luigis are KO'd (or trapped), or when they do not complete a floor in an amount of time. Other Luigis can revive a fainted Luigi by pressing

or touches the touchscreen.

In Luigi's Mansion 3, every ScareScraper floor features a different objective.[1] 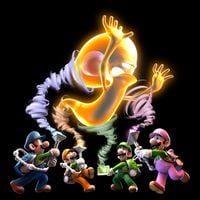 Luigis cooperating to capture The Brain.

All Luigis work together to capture all ghosts on the floors before time runs out. A gauge on the right side of the bottom screen shows ghostly activity that empties as ghosts are captured. Depending on the difficulty, such as in Endless mode, Strong versions of ghosts may appear in earlier floors. The time limit is 5 minutes per floor.

Luigis try to escape each floor by reaching the exit and stepping on the switches before time runs out. The timer starts at 30 seconds, but the time limit can be extended by collecting timepieces (for an additional 10 seconds) from paintings and furniture, or by clearing rooms of ghosts. Rush Mode does not have locked doors or keys, however, Gobbers may occasionally drop from ceilings in dark rooms and block the doors with its goo; they must be captured in order to proceed.

Luigis work together to capture all Polterpups on each floor by following their invisible paw prints with the Dark-Light Device. The Luigis must first locate the kennel before the Polterpups can even be caught. Sometimes Polterpups may even summon other ghosts to hinder progress. Depending on the difficulty of the ScareScraper, the amount of Polterpups to be captured on a floor vary, ranging from a minimum of 2 Polterpups to a maximum of 6. The Luigis have 5 minutes to capture them all.

A combination of the Hunter, Rush, and Polterpup Modes — two Hunter Mode floors, one Rush Mode floor, and one Polterpup Mode floor in random order. It is unlocked by completing the other three modes on any difficulty/floor amount at least once.

In Luigi's Mansion 3, there are only four modes that are selected randomly when a new floor starts. Only either five, ten, twenty (as of version 1.3.1), or random floors can be selected when starting up a new game.

The Luigis must catch all of the ghosts in some rooms located on the map within five minutes; unlike in Luigi's Mansion: Dark Moon, however, time pieces can be found to add 30 seconds on the clock. Once all ghosts are captured, players can advance to the next floor. The total number of ghosts captured is displayed on the bottom right corner of the screen. On rare occasions, all of the ghosts on a floor can be Mini Goobs and Mini Hammers.

The Luigis have five minutes to collect the amount of money required to advance to the next floor. They must search every room possible with Coins, Bills, Gold Bars, and Pearls. Most rooms contain Golden Goobs hidden in some furniture to search for and shows a gold sparkle where it is located; some furniture may need to be revealed with Dark-Light Device. Gold Goobs also hide inside boxes which Luigi must pull a string one side with Gooigi or another Luigi on another side to open. The amount of money needed to be collected depends on how many players are on during this event. The amount of money collected is displayed at the bottom right corner of the screen.

Prior to version 1.3.1, only Golden Goobs and possessed bins appeared in this mode, but later versions of the game add normal ghosts too, with the boxes sometimes either holding the Golden Goobs along with a Hammer or five normal Goobs, or some money without any ghosts appearing. Normal ghosts can also spawn in a room a player walks into for the first time, without any furniture being shaken or boxes being opened.

The Luigis must search for four colored Toads hidden in the rooms. They come in red, blue, yellow, and green. When a Toad is found, they cannot proceed if a room is dark as they will panic while ghosts are present, Toads also cannot proceed if a Possessed Bin is triggered. Once a room is cleared, the Toad can be led back to where the Luigis spawned. The number of Toads rescued is displayed at the bottom right corner of the screen.

The Luigis must defeat all of the crows found in the rooms and with a Strobulb charge or by vacuuming them up. Prior to version 1.3.1, no ghosts appeared in this mode, but they do appear in later versions of the game. The number of crows defeated is displayed at the bottom right corner of the screen.

On every fifth floor, a boss ghost is fought, regardless of the mode. On the final floor, The Brain is always the boss (unless playing on Endless). Boss ghosts are assisted by regular ghosts as the Luigis vacuum them up, with more regular ghosts appearing with more players. The Luigis have 5 minutes to defeat the boss.

After clearing a Boss Floor, all ghosts' HP increase by 5, other than bosses. This only affects them if the host player selects more than 5 floors.

If the host selects ten or twenty floors at the beginning of a new game, every 5 floors will have a rare ghost boss; the Luigis need to find the key to progress and all four of them including switching to Gooigis must stand on a huge button to begin the rare ghost boss fight. There are 19 rare ghosts in the game and one on each 5th floor is random; they include Speed ghosts, Bomb ghosts, Regen ghosts, Lethal ghosts, a Thieving Slinker that can temporarily steal the Poltergust, a Medic Goob that can heal other ghosts, an Electric Oozer that shoots electricity, two Diffusing ghosts that can summon mini versions of themselves, and a Warp Slinker that can teleport a player to a random room on the floor.

Additionally, if a DLC floor theme is chosen, there is a chance that "mini-boss" style rare ghosts will appear there, even if it is not a boss floor. These are thematically appropriate versions of Goobs and Hammers with more HP, and appear in large groups in rooms off of the main path.

On the roof of a ScareScraper, a Boolossus battle begins which is similar to the King Boo boss fight; the Luigis must defeat it within ten minutes to complete the ScareScraper.

When a floor is completed, the Red Coin Scramble! occurs: four Red Coins appear in random rooms and the Luigis have 20 seconds to collect them all for a chance to play Red Coin Bonus! (a sole Luigi has an all-or-nothing chance to play). The bonus game rewards a Luigi with a bonus item if their icon stops next to it. The more Red Coins a Luigi gets, the more consecutive icons of his appear in the roulette, increasing his chances of winning the bonus item at the end of the floor (a sole Luigi has a bonus item randomly selected). The bonus items consist of the following:

Bonus items take effect only on the next floor. Sometimes a bonus item can even be found in vases, paintings, or other furniture. A Luigi can have up to three bonus items equipped at a time.

In ScareScraper, the Luigis can find items throughout each floor, which only lasts until the next floor. Sometimes a floor may have a hidden room containing a chest of four items and money, which can be found with the use of the Dark-Light Device from an invisible door with two lights next to it.

Upgrades are rewarded to the entire team if they reach certain treasure totals. These totals differ depending on the mode being played. Once players earn the Suction Level 3 upgrade, the next upgrades is always Heart Drops up until a certain point. Unlike in Dark Moon Quest, the upgrades are not permanent; the next time the Luigis play another ScareScraper, they must earn these upgrades again.

There are different traps that the Luigis can encounter. In Luigi's Mansion: Dark Moon, these only appear in multiplayer and require the help of another Luigi to escape, whereas in the third game they also appear in single player and will automatically end after approximately 30 seconds if no one frees the trapped player. Having all players caught in traps in Luigi's Mansion: Dark Moon ends the game.

At the end of each floor, the players can view statistics of their activity on the floor they completed on the top screen. Upon completing -- or losing in -- a ScareScraper, the Luigis are ranked based on their performance (e.g. capturing ghosts and avoiding traps, and taking as little damage as possible) and are rewarded in G for the Vault. The higher ranked a Luigi is and the more floors they have cleared, the larger the prize.

After defeating a boss ghost, the player can view the total statistics of all the floors they completed so far, after viewing the statistics of the floor they just completed.

In the results screen, before all the players are ready to begin the next floor, they can see achievements they have obtained on the floor they just cleared on the bottom screen. These achievements are based on their performance, but they're otherwise there just for fun.

There are 47 ghosts encountered solely within the ScareScraper (not including normal Polterpups). One of 45 of these ghosts (excluding the Big Polterpup and The Brain) are fought on every fifth floor, and The Brain is fought on the final floor. If the player is playing multiplayer without a game card, then they see special boss ghosts simply as larger, yellow, common ghosts.