Not to be confused with Boohemoth.

“That scaredy-cat Luigi has made it this far... Oh, we're so frightened! I guess it's our turn, then... All right, Boos, let's assume our real form... But first, how about giving him a little scare!”
—Boolossus, Luigi's Mansion

Boolossus, the Jumbo Ghost, is a Big Boo and one of the portrait ghosts in the game Luigi's Mansion as well as the final boss of Luigi's Mansion 3's ScareScraper mode. This ghost is composed of a group of smaller Boos. Although these Boos are normally timid and shy, when they form into Boolossus, all their fears disappear. The Boo is a servant of King Boo, leader of the Boos, and is the guardian of the third area of Luigi's Mansion. Its name is a portmanteau on the words "Boo" and "colossus", the latter referencing its massive size. Unlike other Boos, Boolossus has glowing yellow eyes. In the gallery, the portrait number of Boolossus is 22. 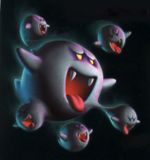 Before the events of Luigi's Mansion, Boolossus was captured by Professor E. Gadd during the professor's travels around the world. E. Gadd used his Portrificationizer to transform Boolossus into a painting and placed the painting in his gallery of other portrait ghosts. However, the capture of Boolossus greatly angered King Boo. In retaliation, King Boo led his Boo minions in an assault on Professor E. Gadd's laboratory. The Boos reversed the setting on E. Gadd's Portrificationizer and reverted Boolossus' state. King Boo then ordered that all the other portrait ghosts that Professor E. Gadd caught should be freed as well. Eventually, after all the portrait ghosts were released, King Boo created a mansion, right next to E. Gadd's laboratory in Boo Woods.

In Luigi's Mansion, Boolossus, along with the other Boos (including King Boo), rests in a secret area under the Storage Room. When Luigi activates a hidden door in the Storage Room, the Boos spring out. However, when they notice E. Gadd's Poltergust 3000, a ghost-catching vacuum device, on Luigi's back, the Boos decide to run off and hide in the mansion.

Eventually, as Luigi progresses through the mansion, he makes it to the Balcony. However, if he has captured less than 20 Boos, he will be blocked in the hallway leading there by a particularly-transparent Boo, referring to itself as "the mysterious power of the Boos," which will then whisk him back to the Foyer. After Luigi has captured at least 20 Boos, he can exit the mansion to the Balcony, where the Boo Radar on the Game Boy Horror starts flashing intensely, indicating a powerful Boo presence. To the left, fifteen Little Boos are circling each other. Once Luigi approaches, they taunt him, and begin to circle around him. They then transport him to an ethereal version of the Balcony, where the Boos merge into Boolossus and swoop down upon him.

During the battle, Boolossus attempts to slam into Luigi. To defeat Boolossus, Luigi must use his Poltergust 3000 to pull Boolossus into one of the two stationary unicorn ice sculptures located on the balcony. When Boolossus touches the statue's sharp horn, it pops, separating into the fifteen Little Boos. Luigi must then absorb an Ice Elemental Ghost from the ice sculpture and spray frost at the Little Boos, freezing them. This enables him to suck them into his Poltergust 3000. Eventually, the remaining Little Boos will reform into a smaller and faster, but weaker Boolossus. As more and more Little Boos are caught, the other Little Boos become more wary of the Poltergust's icy spray and flee when Luigi gets too close to them.

After capturing Boolossus, Luigi acquires the key to the West Wing of the mansion. Defeating the boss counts as capturing a total of fifteen of the fifty released Boos. After the battle, Luigi visits Professor E. Gadd's lab and turns Boolossus into a portrait.

Boolossus's appearance in the 3DS remake of the game, both in-game and in stock artwork, is largely the same as in the original GameCube game, with the only notable difference being that Boolossus and his composite Boos have four teeth in the remake, instead of two like in the original game.

Boolossus reappears in Luigi's Mansion 3 as the final floor's boss in ScareScraper, this time comprised of sixteen normal Boos.

This incarnation of Boolossus borrows and alters many attacks from the main game's final boss (King Boo). These attacks include lightning bolts which strike glowing roof tiles, a long sweep of the tongue which can only be dodge with Burst, a body slam shockwave avoided likewise, and a volley of Bombs (including larger blue varieties depending on how many players participate). Boolossus may also phase through the roof's floor and move in a preset pattern, or may summon red-hot arrows to the roof's perimeter to target the players it battles. The smaller Boolossus shrinks, the faster its movement becomes and the more lightning bolts it summons, though its tongue becomes shorter and shockwaves smaller as a result.

As in the first game, Boolossus must be broken up into its component Boos before it can be sucked up. This is done by sucking up the bombs Boolossus expels and firing them back into its mouth with the Poltergust G-00. Once Boolossus explodes, the remaining Boos inside will fall onto the roof, able to damage players they land on but otherwise completely harmless. While these Boos are dazed, players must suck up their tongues and Slam each into the ground three times to defeat them individually. Unlike the main game's Boos, these Boos are invulnerable to the Dark-Light Device and Strobulb, and once the surviving Boos wake from unconsciousness, they will fly to the far end of the roof and reassemble into a proportionally smaller Boolossus. Once all Boos on the roof are defeated, ScareScraper is completed.

Boolossus shares its voice clips with King Boo in this game.