Henry and Orville, the Twin Brothers are two ghosts from Luigi's Mansion. They are the sons of Neville and Lydia and the elder brothers of Chauncey. Henry uses a toy car in battle and is named after Henry Ford, who was a major contributor to the automobile industry. Orville uses a toy plane in battle and is named after Orville Wright, who, along with his brother, designed and flew the first fully-controllable, powered fixed-wing airplane. The twins' portrait number in Professor E. Gadd's gallery is 14.

Unlike the other members of their direct family, the twins are not fought during Luigi's first visit to the second floor. To reveal the twins in the room, Luigi uses his Poltergust 3000 to spin a helicopter mobile hanging from the ceiling. The twins then decide to play hide and seek with Luigi. They tell him to wait outside until they are ready. When Luigi re-enters, both are hiding in one of five boxes in the room. When Luigi uses his Poltergust, a brother shivers when his box is vacuumed or an element is blown out. 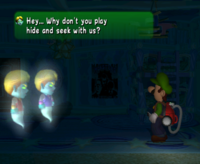 Henry and Orville conversing with Luigi about playing hide and seek.

After Luigi finds them, they accuse Luigi of cheating. They seal the door, then Henry gets on a car and Orville gets on an airplane. They begin to attack him, with Orville throwing bombs at Luigi. All attacks deal ten damage. To make them vulnerable, Luigi sucks the car and the airplane, capturing each twin. Only Orville releases pearls. Upon lighting the room, Luigi retrieves Mario's Shoe. In the Hidden Mansion of the 3DS remake, however, Henry and Orville are not required to capture, as Mario's Letter can be found in the desk in the Twin's Room without capturing the twins, and Mario's Shoe has also been moved to the Billiards Room in Slim Bankshot's possession.

Both twins have teal skin, blond hair, and glowing green eyes. Their heads are round, and their chins are slightly pointed.

Henry wears a white shirt that is tinted blue and has a purple stripe on each end of the sleeves. Over it, he has a purple vest that has purple buttons and other details.

Orville wears the same outfit, but his shirt is tinted yellow and has a yellow stripe on the end of his sleeves. He has a red vest over it that has gold buttons and other details.