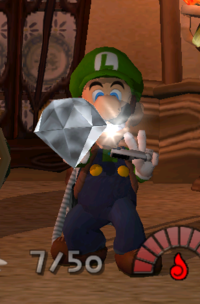 Blue Diamonds[1] are valuable treasures in Luigi's Mansion. Luigi often finds these in Treasure Chests with two Gold Bars after completing an optional gallery ghost in the mansion. Each Blue Diamond is worth 2,000,000G.