“You can take a peek at the ghost expert’s notes!”
—Play Nintendo tagline 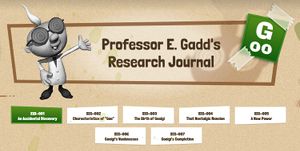 E. Gadd begins by making a short introduction on a "strange liquid energy" collected from ghosts he had befriended. He posits that said energy is "the key to many, many new inventions," but admits that he initially struggled to uncover its uses. His failed experiments with the energy included poking it with iron, pouring it on rubber, and even absent-mindedly dipping a donut into it.

The professor recounts that later during his research, he was startled by a Hider ghost that had escaped from its confinement, causing him to spill the coffee he was drinking into a vial containing ghost energy. He claims that the coffee, described as a "Lunoman Greenie blend from Evershade Valley," quickly reacted with the energy inside the vial, leading to the creation of a green viscous substance. E. Gadd recognized the substance as a new chemical element and called it "Goo," which he then assigned the "00" entry in the periodic table.

E. Gadd writes that he wishes to discover the real-life uses of "Goo", and decides to perform various experiments on it. He first tested fire on the Goo. The substance was melted, revealing a weakness to fire. The professor followed up by spraying water on the Goo, which yielded the same result. However, E. Gadd notes that the bits of Goo which did not touch the water had moved away from the hazard.

The professor also tells that he has discovered other unusual properties of Goo. He reveals that Goo will push back when touched, as well as react to sounds such as music. E. Gadd concludes that Goo is able to react to outside stimulation, and writes that he believes there is a greater purpose for this new element.

E. Gadd writes that he could teach Goo to collect ghosts with his invention, the Poltergust 3000. He first created a mold that he could pour Goo into a humanoid form. When he removed the mold, Goo was in a human shape, but returned to its original form moments later. The professor then used the Pixelator that contains Luigi’s biological data and converted it into an electrical signal. He then was able to input the signal into the Goo. The result was that the Goo has shape-shifted into a green copy of Luigi.

E. Gadd then showed the Goo some footage of Luigi catching ghosts. The Goo began to imitate Luigi’s movements, and even grew a perfectly functional replication of the Poltergust out of its body. E. Gadd decided to call it "Gooigi" and felt determined to find the perfect place to test "his" ghost-hunting abilities.

E. Gadd admits that he had difficulty in thinking about an optimal place where Gooigi could be tested out. He also had to come up with a plan to obtain more ghost energy from beyond Evershade Valley in order to confer Gooigi paranormal capabilities. As he pondered a solution, he realized that he could send Gooigi to the mansion where he originally worked with Luigi. However, since the mansion had vanished long before, E. Gadd had to program his Pixelator so that it could connect to the past and make revisiting the mansion possible. In this way, he contacted himself and Luigi from the past, asking them for help, and outsourced Gooigi to them afterwards.

When he contacted Gooigi after a while for a check up, he discovered that he was very successful in his tests and had collected a large amount of ghosts. As a final note, E. Gadd writes that he is thinking about other possible interactions between ghost energy and Goo.

Professor E. Gadd writes that he began his research in improving Gooigi's qualities "beyond that of a normal person" with the large ghost supply obtained by Gooigi from the original Luigi's Mansion. As he analyzed the ghost energy, he discovered that ghosts from the original mansion were structured differently from those in Evershade Valley and became clear to him that there are various types of ghost energy based on their molecular structure. E. Gadd remembers that he still needed a way to benefit Gooigi from the new discovery, and since Goo is different enough from ghost energy, he would not be able to give him ghostly properties like vanishing or going through solid walls.

E. Gadd knew that Gooigi's viscosity could be significantly enhanced to enable him to slip through tight spaces; however, he needed the optimal mix of ghost energy applied to Gooigi. He then began testing various mixtures of ghost energy and Goo. Most of the experiments either had no effect on Gooigi or made him more rigid. After many more tests, the final formula let Gooigi retain his form while still giving him a fluid quality, allowing him to pass between bars. Satisfied by the success of this experiment, E. Gadd decided to take a break with a cup of Lunoman Greenie coffee blend.

E. Gadd began his research into addressing Gooigi's vulnerability to fire or water. After reducing the density of the Goo to no avail, he then attempted to increase the density instead. However, he was startled by Polterpup, causing him to spill the compound onto his head. The compound began to harden and cause E. Gadd to suffocate, but he was quickly able to run to the shower and wash it off with water.

After performing many tests, E. Gadd eventually realized that eliminating Gooigi's weaknesses was a task beyond even his own expertise, but his experiments had at least subtly improved Gooigi's viscosity. E. Gadd summed up the results of his tests:

Still traumatized by his near-death experience, E. Gadd sipped a cup of Lunoman Greenie coffee as he pondered his next experiment.

E. Gadd noted that Gooigi had a tendency to scare ghosts away, which made him inefficient in catching and collecting them. By taking precise control of Gooigi, E. Gadd could eradicate the issue.

At first, E. Gadd implanted a communication chip inside Gooigi to enable him to give Gooigi directions via a controller. This method proved successful at first, but after a while E. Gadd started facing issues with the remote, one of which was being unable to stop Gooigi's Poltergust from vacuuming once it was started. This later led to E. Gadd getting his head pulled inside the Poltergust's nozzle, with no apparent way to escape; however, he accidentally kicked a bucket of water and a mop onto Gooigi, which promptly melted him and let E. Gadd go.

Shortly after the incident, E. Gadd abandoned the previous idea and realized that he could use his own consciousness to control Gooigi more easily. He thus equipped the new Poltergust G-00 with a sensor that would make this possible once Gooigi was unloaded from the Poltergust. This caused him to enter a "sleep-like state", which he describes as a "minor hindrance at best", as he could quickly swap the consciousness back between Gooigi and him when in danger. At this point, E. Gadd considered Gooigi to finally be complete.

E. Gadd decided to enjoy a cup of Lunoman Greenie coffee in celebration of Gooigi's completion, when he received a letter from the owner of a luxurious hotel. The owner addressed in the letter that she would let E. Gadd stay at the hotel free of charge and offer her entire collection of ghosts in exchange for personally seeing King Boo, whom E. Gadd had kept in containment in his vault since Luigi's previous adventure. Enthusiastic for this chance, E. Gadd loaded the Poltergust G-00 and the canister containing King Boo into his car and drove to the hotel, setting the events of Luigi's Mansion 3 in motion.

1 - E. Gadd's French name ("K. Tastroff") is misspelled as "K. Tastrotff" on the journal's nintendo.fr link, but is spelled correctly on all other pages related to the journal.[2]