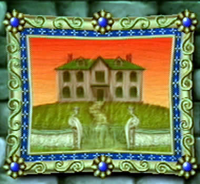 Portrait of Luigi's NEW Mansion with Rank B.

Luigi's NEW Mansion is a mansion that appears after defeating King Boo in Luigi's Mansion. The new mansion's look depends on how much money Luigi has earned throughout the game. If Luigi earns Rank A, the mansion becomes a large manor with the letter "L" marking its front. Each lower rank provides progressively smaller and smaller houses, culminating in a tent for Rank H.

The Nintendo 3DS remake of the game features newly designed paintings of the mansion itself and also includes a new Rank S painting.

A similar feature is used for the end of Luigi's Mansion 3, after The Last Resort collapses and is rebuilt.

Luigi's house as seen in the introduction of Luigi's Mansion: Dark Moon. 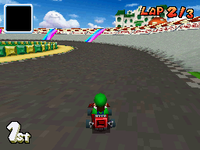 The Rank A mansion, as seen in the background of GCN Luigi Circuit in Mario Kart DS.
Retrieved from "https://www.mariowiki.com/index.php?title=Luigi%27s_NEW_Mansion&oldid=3825668"
Categories: