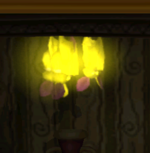 The purple bats (left) and the yellow bats (right)

A bat,[1] also known as a Ceiling Dweller,[2] is a minor type of ghost found in Luigi's Mansion. Bats come in two colors, purple and yellow, and often appear in large groups. Purple bats are found hanging from the ceiling in hallways and staircases. When Luigi walks by them, they swoop down to attack him. If one hits Luigi, he sustains five HP of damage, and the ghost disappears in a puff of smoke. If the strike is unsuccessful, the bat returns to the ceiling and prepares for the next attack. Yellow bats also hang from ceilings, but they attack only if Luigi wakes them up by turning on the Poltergust 3000 on vacuum mode (elemental mode does not work); due to a glitch, simply pressing

while in first-person mode with the Game Boy Horror (in which case the Poltergust 3000 is unusable) also wakes them up. For them to attack, Luigi must be in the same room or corridor as they are. In all other respects, they are exactly the same as the purple bats. Bats can be easily sucked up with the Poltergust 3000 or immediately destroyed with elemental powers.